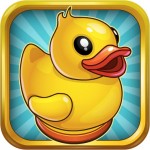 As much as I love tower defense games, I have to admit that there’s currently an issue of over-saturation within the genre. As such, I’m always looking for games that differentiate themselves from the pack. Bulkypix’s Bug Invasion ($1.99) attempts to do so with its emphasis on nature’s smaller denizens. Unfortunately, while battling for food supremacy offers a different take on tower defense, Bug Invasion falters in basic genre staples, leading to an overall generic experience.

As its name implies, Bug Invasion puts you in the role of a young protagonist as he wages war against an army of creepy crawlies that have come for the sugar. You’ll help defend the sugar utilizing standard tower defense mechanics. Bugs come down pre-determined lanes in specific waves while you defend against them with a variety of strange towers. While placing a Soda Tower or Blender seems neat, you’ll quickly realize that most towers are easily classified in the usual TD nomenclature (i.e. Siege, Anti-air, e.t.c.). 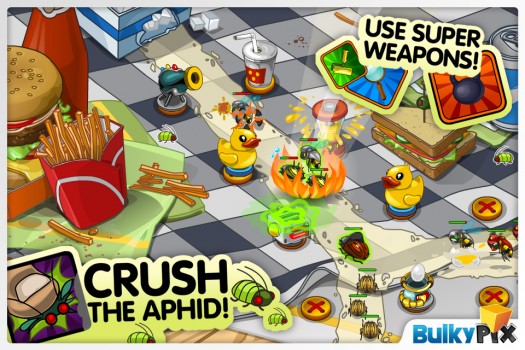 Bugs, meanwhile, also come in standard groupings such as the fly that’s immune to siege but weak to anti-air, the cockroach tank that requires a ton of siege attacks (and are effectively immune to piercing) and so on. There’s nothing necessarily wrong with following standard tower defense tropes, but fans looking for something different in terms of gameplay won’t really find that here.

Bug Invasion‘s one contribution is its inclusion of aphids — small bugs that randomly pop up on the backdrops and must be “squished" by tapping on them. Squishing aphids adds them to your inventory and serves as the currency for permanent tower upgrades and super-moves that are activated in-game. While gamers are welcome to purchase additional aphids via IAP I found the collection system to be quite reasonable with little reason to resort to purchases. Unfortunately, this doesn’t do much to differentiate the rest of the gameplay. 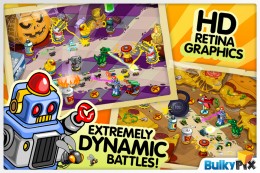 Bug Invasion‘s presentation is a mixed bag. Visuals are colorful and look decent, with the backdrops being especially detailed. Unfortunately, the animations are rather static and don’t do the rest of the visuals justice. In addition, it feels like there are too many instances of minor changes to differentiate between enemies, leading to a distinct lack of individualization within enemy classes. It all just feels a little bland. The same goes for the music, which offers a catchy tune but is plagued by the fact that it repeats incessantly on a loop with little variety.

When it comes to tower defense, I feel as if there are a few features that should be deemed necessary in this day and age. For example, the inclusion of a button to speed up the enemy waves is a must-have. Yet, Bug Invasion doesn’t include such a feature, despite the fact that the game runs extremely slow without one. Strangely enough, you can start future waves sooner, but once you start it, you won’t be able to change the speed. When you combine this with the large amount of waves in later missions, Bug Invasion becomes unnecessarily slow.

I also found a few other annoyances in Bug Invasion, such as the unusually long load times when you launch the game, switch between menus, and start missions. In addition, the incessant nagging to join an email list when I launch the game despite my repeated attempts at saying no quickly becomes irritating. Also, while I didn’t experience such issues myself, there are reports of start-up crashes and other random bugs.

This all leads to a tower defense title that is at best a generic addition to the genre and at worst a game that fails to include features that even standard tower defense games should have. It’s hard to recommend Bug Invasion for anyone but the most diehard of tower defense fans looking for their next fix (and even then, I’m sure there are some classics you may have missed). For everyone else, it’s probably best to avoid this infestation.