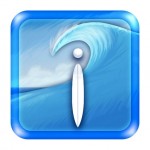 Last month we brought you word that Cubed Rally Racer (Free) developer Jared Bailey finally had a follow-up iOS project in the works called Infinite Surf (Free). A pretty big departure from the extreme challenge of Cubed Rally Racer, Infinite Surf was more of a relaxing ride on the ocean, from a pseudo 3rd-person perspective that you don’t typically see in surfing games.

We took an early version for a spin in one of our TA Plays videos, and enjoyed our time with the game. It’s a simple tilt-based game where the goal is to guide your surfboard through the ocean on an endless wave and collect coins. Occasionally you can pick up a power-up that will cause your wave to curl and churn out bonus coins, or another that lets you carve up the wall of the wave.

The really clever part of Infinite Surf is how it’s more or less up to you to determine how fast, and thus how challenging, the game gets. Various point multipliers can be picked up which will net you more points, but it will also increase your speed. Picking up several of them during the course of a run can lead to some huge scoring opportunities, but it also becomes risky with the speed increase.

If high scoring isn’t your thing you can just ignore the multipliers and enjoy the scenery at your own pace. There is also a selection of different boards to unlock using the coins collected during play that each have their own attributes, and a second environment with a sweet sunset that you can unlock as well.

Infinite Surf is a really simple game, to the point that it doesn’t even pose much of a challenge until you’ve gotten pretty deep into a run and increased your speed significantly. But its strength lies more in it being an experience, as you enjoy the cool scenery and unique perspective while hypnotically carving your board back and forth across the water. There’s just something that makes me feel good when playing Infinite Surf, so if you dig those relaxing, artsy kind of games that you can lose yourself in then definitely give it a look.