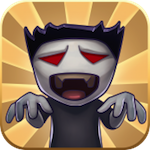 The first content update for Brainsss ($0.99) is sort of a big deal. Version 1.5 of the strategy zombie game, which puts you in the shoes of the horde, packs in all sorts of fresh fixes and tweaks, as well as new content for its most core base of fans.

For the game’s base, 20 new heroes and comics have been added. More than 90 achievements have been, too. Version 1.5 also rocks improved AI, a top-down mode for RTS users and a speed toggle that lets you set the pace of your undead takeover — a welcome addition, indeed.

To mention a few tweaks: iCloud support has also been added in, as well as new retina UI elements, faster loading between levels, and “improved and more responsive controls."

Interestingly, the game has also been streamlined for casual users. A new one-touch kind of casual mode has been introduced, and the help system has been beefed up.

There’s a lot more to this update, so feel free to check out the game’s update notes on our sister site AppShopper. A free version of the game (Free) is available now, too, in case you’ve been sitting on the fence.