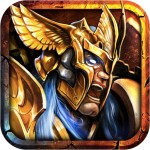 After a few hours of Oneclick’s Angel Salvation (Free), you’re likely  to have developed Tetris Syndrome: colored gems, healing crosses, and devilish earth-tyrants will dominate your thoughts. It’s turbo-charged high fantasy aesthetic notwithstanding, Angel Salvation begins zen-like, and your eyes may begin to glaze over as your fingers move about the screen, lazily flicking gems around, making matches and raining hellfire on your enemies.

The match-three gameplay drives a larger, Byzantine RPG, but in order to let you familiarize yourself with the differences between a guardian and a hero, between strengthening and evolving, between coins, diamonds, help points, and gems, Angel Salvation starts off pretty slow. You don’t have to pay too much attention to the puzzle aspect for the first hour, give or take, and you can content yourself with making little three-gem matches and watching horned succubi explode. I found the experience kind of soothing and hypnotic, like a Tolkien-flavored quaalude. 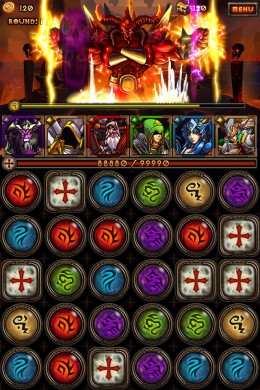 And then I realized — with no help from the tutorial I accidentally skipped — two crucial tweaks on the standard Bejeweled-style format: a turn can end without the player having made a match, and moves aren’t limited to adjacent spaces. In Angel Salvation, you can move any gem to any spot on the grid, displacing other gems along the way.

Suddenly, a breezy, lightweight puzzle game turns into a go-like case study on planning and engineering, a high fantasy Rube Goldberg machine. With a little luck and calculus, gems will come cascading down, generating combos, which multiply your damage output. One flick of the wrist can wipe out an entire screen of enemies.

But mechanics don’t exist in a vaccuum, and Angel Salvation is balanced and paced just so, and the discovery of the game’s finer strategies spring up organically as the game gets harder. Eventually, the game turns brutal, these higher-level tactics become critical, and every turn must be squeezed for combos and multipliers, like blood from a stone.

Eventually, I came to appreciate the overblown fantasy framing it all: the more spikes, fangs, baroque longswords, and glowing eyes something has, the more powerful it tends to be. It’s a nice visual shortcut for how Sun-Tzu you’ll need to be to survive the encounter.

So, yes, the match-three portion of Angel Salvation is fresh and fun and full of tension, but it also dovetails into a larger, Persona-like RPG that, while perhaps not as innovative, is smart and well-executed. 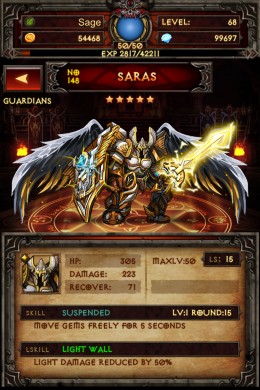 You’ll have access to a stable of monsters and heroes, each associated with an element (hyperbolically called your “Legion" in-game). From these, you’ll take five into each battle, and matching the colored gems will do damage based on the corresponding monsters’ stats. You can build a balanced team to take advantage of every gem combination or, since quests are color-coded, load up on, say, fire-based monsters before taking on a grass-coded quest.

Completing quests gives you money, diamonds, and more monsters for your roster. Money pays for strengthening and evolution, both of which are done by fusing monsters together. These mechanics are relatively straightforward, but there’s a fair amount of flexibility, and they create an effective feedback loop — finish quests to make stronger monsters, which allow you to finish more quests. There’s also a great sense of anticipation and discovery after every battle, hoping to land some rare beast or undead lich.

Diamonds are used to generate more powerful monsters for your retinue, but also to expand your legion past the default 20 or to replenish your mana pool. Each quest has a mana cost, but your mana can be replenished by leveling up, or piecemeal every eight or so minutes. In a game with several different types of in-game currency, diamonds are the most versatile and the rarest which is exactly why they’re at the forefront of the game’s IAP.

On the surface, Angel Salvation seems pernicious: if you run out of mana, you can’t keep playing unless you replenish with diamonds, which can only be obtained by paying real money, or, uh, playing the game you’re locked out of. In practice, this has never been an issue for me. Not only is the in-app storefront not working yet, but I’ve only ever run out of mana after making really bad choices. Quests with higher mana costs are more difficult, and it should be easy to judge whether or not you’re boxing out of your weight class. 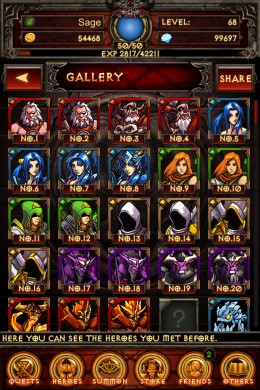 The mana system also informs some of the larger design choices. Mana is replenished over time, and each quest is relatively short. As a result, Angel Salvation is an ideal game for your morning commute or coffee break: by the time you get back to it, your mana will have naturally replenished itself.

The last piece of Angel Salvation‘s economy are called “help points," a remarkably clever and pro-social system that allows you to create a friend list and use other players’ best creatures as reinforcements in your own campaign. Before each fight, the game generates a set of characters available to you, a mix of your friends’ and strangers’. Using reinforcements gives you help points, which can be cashed in for extra monsters for your legion.

Conversely, you’ll also receive points when someone else uses your monster, further incentivizing the growth and evolution systems. Upgrading your own team will make them more attractive to the market, which lands you points to buy more fuse-able beasts, which makes your team stronger, etc.

Help points create (yet another) Skinner box, but it’s also oddly comforting. When I woke up this morning, I had 800 extra help points, which means that while I was sleeping, 80 different people found my Angel useful enough to bring along. (And seriously, she’s great. Her light element and healing ability are both relatively rare.)

Angel Salvation seems needlessly complex on the outset, but none of the mechanics or currencies are particularly deep once you get the hang of them. Each one, however, is well-realized and potent in the larger game, and they all create a sense of constant progression that’s attractive without being predatory, each little loop nested in another one. Angel Salvation tweaks match-three-driven RPGs effectively, and it does the same to our established notion of social “energy" mechanics — it’s smart, engaging, and generous.