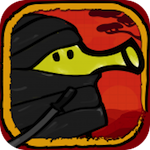 Lima Sky dropped a massive update for the original Doodle Jump ($0.99) while you were sleeping last night, adding a new ninja theme and several new obstacles, monsters, and power-ups to the core game. Also, a coin mechanic has been introduced. As you play in this theme, you’ll pick up coins, which can then be used to purchase stronger power-ups or costumes that boost certain aspects of your Doodle Jump avatar.

We’re digging the look and the new content in this super saturated ninja theme, but the store is what’s really catching our eye. In it, you can buy outfits that make you stomp when coming off a jump or make you invisible to monsters. You can also buy modifiers to existing power-ups, making them faster. Heck, there’s even a “head start" cannon as well as a resurrection power-up.

Lima Sky calls this its most epic update to Doodle Jump ever, though we note that the HD version of the game has yet to receive this ninja content.

We’re glad to see some of these new endless mechanics, like a head start power-up and the resurrection power-up, make their way into Doodle Jump. This was one of the first iPhone games we fell in love with, and it continues to rock thanks to huge updates like this one.