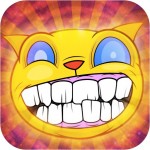 I’ve been delving into a lot of, well, let’s call ’em obscenely difficult games lately. Bitless ($0.99), for example, hit my masochistic streak just right. Seems that sort of thing appeals to some of you as well. If so, you’d better be checking out Morbidware’s Sunshine ($2.99). It never hits that phone-breaking level of frustration, but this orbital platformer has a cruel streak.

But hey, maybe you’re not so into the more vicious sort of platforming. I hear you, and so does Morbidware. While it’s never easy, you can tweak Sunshine’s challenge to your skill level. So don’t let a little fear of failure keep you from this sexy little platformer—you’d be missing out. It’s the whole package: fantastic level design, gorgeous environments, great music. The more hardcore side of things is a bonus, but it’s not the only thing Sunshine has to offer.

For instance, there’s a story, told through a number of adorable (if poorly spelled) comic scenes. That screaming cat head in the app icon? That’s a photon. Sure, okay, let’s bear with Morbidware on this one. That photon lives in a multiverse that’s recently seen an invasion of black holes—very evil black holes. They’re out to steal all the light from the universe. Our little photon needs to strap in, stand up against them and take back the light. 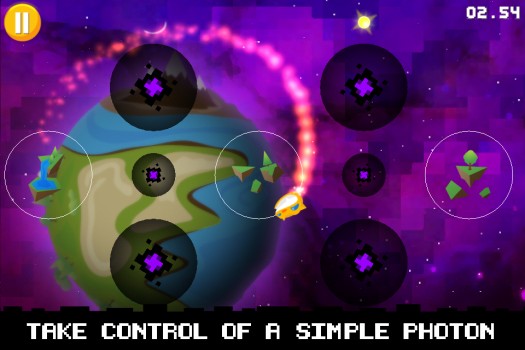 The light comes in the form of starlets, shiny little orbs that are scattered five to a level. They’re found orbiting asteroids, locked away in cages, and attached to black holes. Your job, little photon, is to collect at least three in each level, all the while orbiting and flying and screaming as you barrel through space.

Three out of five’s not bad. It’s important to remember this as you make your way through Sunshine’s 60 levels, because collecting all five starlets can be a serious pain. You’re rated out of three stars—one for completing the level, one for collecting all the starlets and one for beating the par time. It can be hard enough to earn one of those stars, never mind three. But then, pushing your limits is where the fun comes in.

By default, you only have one life with which to complete each level. That life has to carry you through hops between celestial bodies, dodging black holes that might be orbiting with you or holding your starlet, past all the things that stand in your way. If you’re not up to the task, you’re not completely out of luck. You can give yourself up to two extra lives in every level at the push of the button. 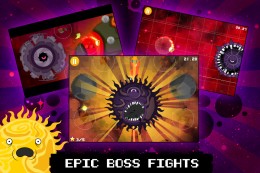 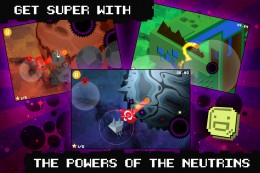 There are three cons to that call. The first is that your star rating reflects your choice, turning silver if you’ve given yourself one extra life and bronze if you’ve taken two, no matter whether you need to use them. It makes the choice much more significant. Do you really need that extra life or can you squeak by without? The second is the shame that comes of knowing you took the easy way out, but trust me—you’ll want a rest from the punishment every once in a while. The third, and most unfortunate, is that extra lives can kind of break the game.

Sunshine is incredibly fast-paced and twitchy. You need to master the short hop that takes you to a safe orbit, and the long jump that slingshots you around an obstacle and back to safety. When you can hop on to a black hole without dying, you end up subverting whole chunks of the level design. They’re designed with such care that skipping through them is a shame. Better to make it through than to fully appreciate a completely impenetrable level, though. And, frankly, extra lives don’t always make the difference you might expect. Trust me on this: frantically flailing will get you nowhere.

As with many of the better mobile platformers, Sunshine keeps its controls simple. Movement is automatic. You whip around the planets at high speed, waiting for the exact moment to make your jump. Or you jump frantically, as whatever you’ve landed on slips into something more deadly. Jumping is a tap, short for a hop and long for a leap. And as you leap you need to keep your orbit in mind, because what goes up will most definitely come down. Whether you come down on a planet, a black hole or right back where you started is in your hands.

So it goes, through Sunshine’s list of levels. There is more to discover, power-ups, boss encounters, and so on, but the most important parts are there right from the start: the jumping, the collecting, the dying. And more and more as you learn the motions, surviving and winning. Accompanied by gorgeous art and a great soundtrack, you’ll discover all the skills it takes to save the multiverse. From there, it’s just a matter of pulling it off over and over, never meeting a bad end at the edge of a black hole. Sounds easy enough, right?