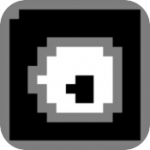 I’m worried for the safety of my iPhone. I’ve started shaking it when I die in Bitless ($0.99), which might progress to throttling it if this keeps up. I’m not the sort to break my toys in anger, but this game is teaching me to get there.

It’s not like this is the first time I’ve played a precision platformer. Normally I’m pretty cool with them. So why do I let this game get to me? Maybe it’s the minimalistic art—it’s hard to hate on something cute and cuddly, but squares? Yeah, I can rage at squares. Or maybe it’s the way one particular square gloats every time I die. That might have something to do with it. I’m starting to think it’s option three, though: I’m mad at myself. I know these jumps. I’ve lived and breathed these jumps. So why the hell can’t I make these jumps?

To be fair to myself, Bitless is pretty unforgiving. The square that you control autoruns along at a fast clip, and will happily fall off an edge, run into an evil eye, or smash into a wall and turn around the moment you blink. The only thing you control is when to jump, and for how long. A quick tap will flip you forward, and a long press will make you take a flying leap. The trick is to find the exact point in that spectrum that will let you make a given jump without dying—either there, or some time in the future when that one little mistake gets you killed. 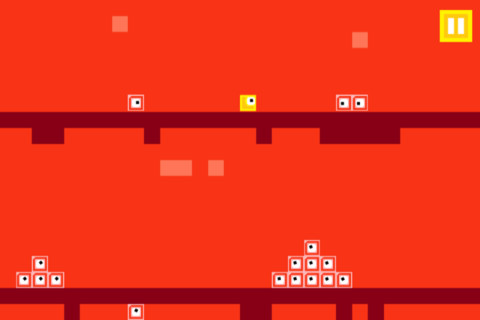 The way Bitless’s levels are structured means that each move you make compounds with the others. If you mess up one of the three quick flips here, then you won’t land in the right position to make the wall jump there, and you’re toast. So every single jump counts, and you can’t make a single mistake—kind of a pain when the levels get longer, taller and more confusing. The goal each time is simply to make it to the portal without dying, but it doesn’t take long before that’s far more easily said than done.

And throughout, the eyes are watching you. Watching you, then getting in your way. Then, eventually, chasing you and murdering you. Touch one and you die, so they become the obstacles, the boundaries, and the enemies you’re helpless to fight. Remember, all you can do is run and jump. 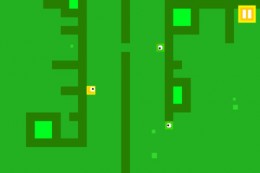 It may be that they eventually get even more vindictive, though I can’t imagine how. Still, I can’t say with authority that they don’t. You see, Bitless has four worlds. You need to defeat ten of thirteen levels and a boss in each to move on to the next, and I’m sitting slightly under that mark in the third world. Every time I start one of the relentlessly cheery, colorful levels I make the same jumps, then the same mistakes, and end up with the same deaths. And that awful, evil, black-eyed square tallies up another death on the worldwide deaths board.

Maybe that’s what makes me so frustrated when I fail: the knowledge that each failure is making things worse. Not only does the enemy claim to grow more powerful from my deaths, not only am I making a global counter tick ever-upwards with my failures, but each death also adds to a total I’ll be presented with if I ever manage to finish the level. Every time I die I know my score will be worse for it. Thank goodness for small favours—the leaderboard isn’t on Game Center yet, so none of my friends get to see my shame. After the next update I may need to go into hiding.

But the chiptunes drive me on, and the insanely quick loading times keep me going. I’m glad for that, because Bitless is a good game. In a less generous moment I might call it evil, vindictive or cruel, but that’s just the anger talking. This is a precision platformer perfectly tuned for its platform—it can’t help that I’m not tuned for it. You’ll either need to be very skilled, up for a good challenge or a bit of a masochist to enjoy this game, but hey, that covers a lot of people. If you’re one of them, you should definitely check it out. Then you can commiserate with your fellow gluttons for punishment in our discussion thread.