Maybe it’s the ’90s era gamer in me, but I always feel right at home playing a sidescroller. Wrrr (Free) is just that, with a touch of hand drawn charm to make the package even more appealing. You play a dinosaur dad who has been separated from his family and has to go on a trip to find them. And so off you go through nine different levels of challenge to rescue them. Yes, I know you’ve heard it before, but hey, we don’t play iOS titles for the deeply compelling stories (although I admit there have been a few exceptions).

On the whole, Wrrr feels very traditional, and reminds me a bit of Earthworm Jim. You have a world map, which is really very handsomely drawn, to show you your progress as you go through each level. Your controls are basic: a forward and backward arrow in the bottom left corner and a d-pad in the right that lets you jump, crouch, swing your tail behind you, and strike forward with your weapon.

My first impression of these control was that they were all a bit stiff. I kept wanting to jump diagonally, but the controls just don’t quite allow you to do that. As a result, I never really fully relaxed as I played because I was always paying attention to getting the controls “right." They aren’t poor, but they do take a bit of getting used to.

As you go through each level, you’ll collect apples and avoid (or smack) baddies as you make your way. Like any respectable platformer, Wrrr has floating platforms, annoying flying enemies, and all the environments you are expecting (ice! fire! caves! swamps!). The overall look and feel is cute, and there are some tricky enemies that you have to master the right timing to take out. Each level rates you on completion time and gives you stars based on how well you did. Of course, you can always replay any level to improve your rating. The game does get a bit tougher as you progress, but I always found the challenge level manageable. 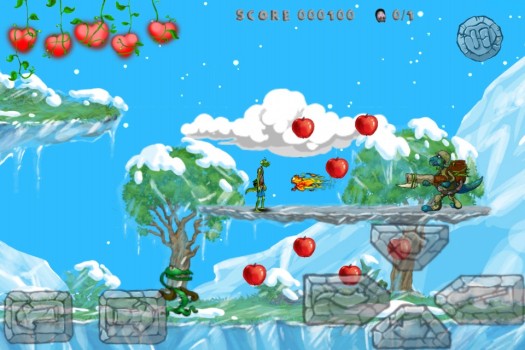 Wrrr was originally a Mac game (which you can play here), and I can’t help feeling that some of its charm is lost on the smaller iPhone screen. I wanted to really love it, but I felt it lacked polish. It doesn’t have any of the Facebook or Twitter connectivity options we’ve come to expect, and it’s not compatible with Game Center. Personally, I don’t use those functions often, but when a game doesn’t have them, I do notice. It seems that networking and sharing scores are such an essential part of what iOS gaming is about, so I felt their absence was noteworthy.

While Wrrr is a perfectly acceptable platformer and may be fun to pass the time, it’s not one I would keep on my phone to replay over and over.