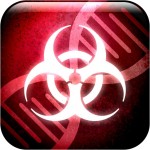 Plague Inc ($0.99) is a strategy title from Ndemic Creations with a pretty dark goal: launch a disease somewhere in the world and slowly infect the population, eventually infecting the entire world and eradicating humanity.

Sure, it’s just a video game, but there’s something about it that gets under your skin. First it’s fascination as you watch your creation spread and the number of infected skyrocket, then a sense of awe and sadness as that number slowly begins to reflect the number of deceased by your own doing. We pretty much cover it all in our review.

It can be unsettling playing Plague Inc, but also hugely satisfying due to the many different ways you can go about accomplishing your goal. You control the evolution of your plague, its resilience, and the manner in which it spreads by way of various upgrade trees. 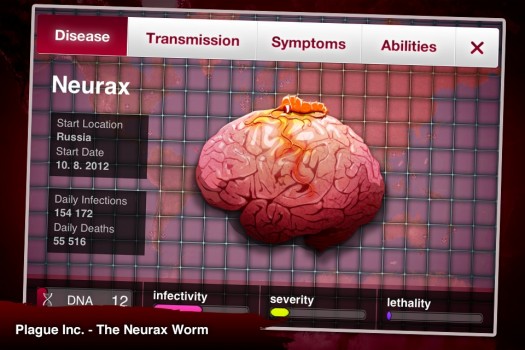 There are 7 different kinds of plagues in the game, and as Ndemic has revealed there’s a special new plague called the Neurax Worm coming in the next update. If you’re curious what this worm does, well, it burrows into the brain of its host and is able to take control over their bodies. Sounds pretty unpleasant.

The Neurax Worm option will come with new infection behaviors and new options for evolution. Since it can control the minds of its hosts, a new feature called Trojan Planes allows you to get a host to fly to the country of your choosing and begin infections. There will also be more ways to win besides just eradicating humanity, and new graphics and sounds to accompany the Neurax Worm.

There is a tiny catch: you’ll have to have beaten the game on Brutal difficulty in order to unlock the new Neurax Worm content for free. Alternately, you can purchase it for 99¢. Seems like a good idea, offering a paid expansion pack but having the ability to earn it for free by accomplishing a goal in the game. I like that.

Whether you buy the new expansion or not, there is still a ton of stuff in this update that all players will receive, including new events and achievements, an improved interface, better graphics and AI, Twitter and Facebook integration, and a host of other tweaks and fixes. 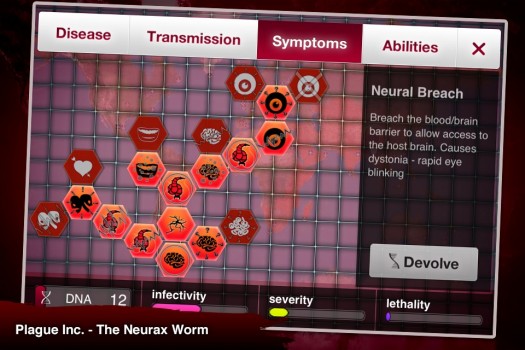 Plague Inc is one of those strangely compelling titles. There’s not a ton of interaction while you’re watching your plague overtake the world, but the choices that you’re given and how you utilize your resources are crucial for success.

If you think you can live through the guilt of murdering billions of people through devious and likely painful ways, then make sure you check out Plague Inc and keep an eye out for the Neurax Worm update which has already been submitted to Apple and should be coming soon.