Heavily inspired by the classic ‘destroy-the-world’ game Pandemic, Plague Inc [99¢] will either make you (a) feel like a horrible human being, (b) chortle malevolently at your iOS device of choice, or (c) vacillate violently between the two.

Ndemic Creations’ new strategy game is one that comes with a simple objective. As a fledgling pathogen, one that initially starts life ill-equipped to do anything but migrate from one sneeze to another, it is your job to make humanity go the way of the Dodos. No one is to be left alive.

It’s a strangely unnerving venture. When you first start up the game, you’ll be delivered on a rather realistic-looking world map. From there, you’ll then be called upon to select a country of origin before you’re permitted to patiently incubate within the unsuspecting inhabitants. As you begin infecting more and more individuals, your pool of DNA points (it’s the currency utilized by unicellular fiends, you see) will slowly increase. As you might have guessed already, that’s where the magic start. 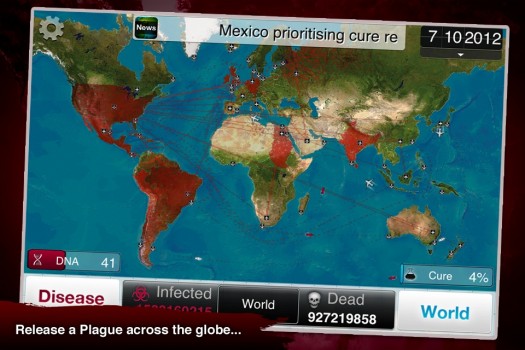 A tap on the menu button labeled ‘Disease’ will lead you to an overview of your little menace. There are three areas in which you can spend your DNA points: transmission (Want to be the new avian flu? No problem!), symptoms (Yes, you can turn your unfortunate victims into tumor-riddled, paranoid lepers if you want to.) and abilities (In general, this is where you go to do things like increase your resistance to the cold and effectiveness against rich people’s hypochondria). Each time you ‘evolve’ a new attribute, you’ll be able to unlock further elements within that tree. Purchasing the ‘sneezing’ symptom, for example, will eventually allow you to incite total organ failure.

Take heed, budding bacterium. DNA points aren’t easy to acquire. The only way to get them is through devolving characteristics (you’ll only get a flat rate of 2 DNA points out of that) and infecting or killing human beings. Given the fact that there are only a finite number of homo sapiens in the world, this can make things rather tricky. Splurging on transmission methods may render you as mild as mother’s milk while an overzealous focus on lethality may leave you incapable of dealing with humanity’s attempts to find a cure to you. 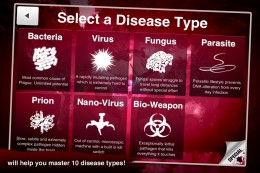 That’s also where the (foul) magic lies. Plague Inc is a balancing act, a test of your foresight and your decision-making skills. When the human race finally takes notice of the fact that eight million people are suddenly afflicted with a potentially fatal ailment and rush towards achieving a cure, do you pour your DNA points into slowing their research or do you attempt to kill them where they stand? It’s harder than it sounds but it’s also deeply, deeply satisfying.

Seriously. There’s nothing quite like watching as the scarlet of infection spreads across the globe, slowly transforming the verdant green lands into a ruby-red cesspool of germs – ahem.

The audiovisual presentation is largely minimalistic. Most of your time in the game will be spent either building your Doomsday microbe, analyzing trends in world data or staring at planes and ships as they cart their contents across the world. As you might have already guessed, the colors on the map will change depending on how well your pandemic is doing. While red is an indication of infection, the amount of black you see on your screens will tell you how many have fallen. 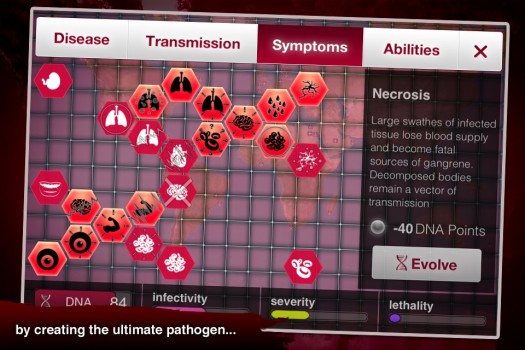 There’s an impressive amount of playability to the whole thing. Asides from three difficulty levels, you’ll also be eventually be able to take on the role of a virus or a parasite or even a biological weapon. Sadly, there is no multiplayer to speak of just yet.

Plague Inc doesn’t deviate very far from the formula set by its spiritual predecessor. In fact, anyone who has played Pandemic will probably feel completely at home here (arguably the biggest change here is the sporadic manifestation of little ‘bubbles’ you can pop in order to acquire additional DNA points or to slow research). Nonetheless, it’s also impossible not to want to provide hearty recommendations anyway. Plague Inc will snag your attention in all the right ways and keep it there long after you’ve come to terms with the fact you’ll be indirectly responsible for human testing.