I have a confession to make: I kind of, sort of like Twilight. I can’t tell you if I’m team Edward or team Jacob, but there is some real trashy vampire fun going on in that series. I just can’t get behind Bella, though. Moping, sighing, putting herself in harm’s way for a hint of attention? I’d like to think I could handle myself better in her shoes.

And you know what? Vampire Boyfriends ($2.99) tells me I’m right. It’s the first release from Strange Loves, Tin Man Games’ new line of supernatural romance gamebooks. It has all the trash of Twilight with none of the angst or hangups. Best of all, it has a sense of humor. Just don’t tell ’em I sent you if you’re not over 17—things get a little too racy for the younger crowd.

You play a college student just starting on the path of becoming a famous actress or MMA fighter—those are your options, so choose wisely. You can be smart, funny, sexy, and talented, assuming you make the right choices. Or you can be the sort who will get roaringly drunk and go home with the first mysterious stranger she meets in a book about vampires. Less smart, but hey, who wouldn’t want to see where that goes? 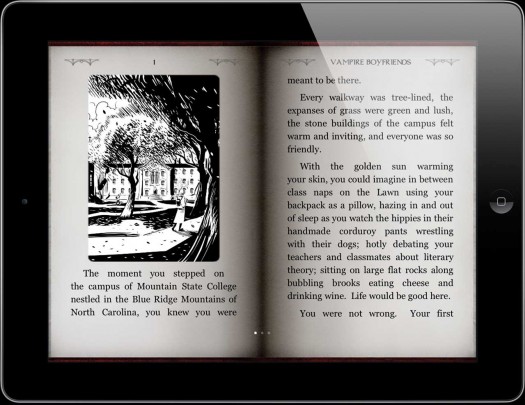 Vampire Boyfriends lets you come to a bad end in any number of ways, which is half the fun of this sort of thing. It also lets you diverge wildly from the more canonical paths, leading to some of the funniest bits in the book. Each ending or major milestone has an associated achievement, and hunting them down is a game all on its own.

Most of the pages are spent on the main paths. There are many routes through, but they hit a few common notes. There are chances at romance and passion (non-explicit, of course, but breathlessly described). There are opportunities to pick sides in an immortal conflict. And there are roles to fall into, like the slayer or the love interest. You can also strike out as an independent woman, stick to self-interest or hold out for a romance that’s more your style. The options aren’t endless, but there are a lot of ways through. 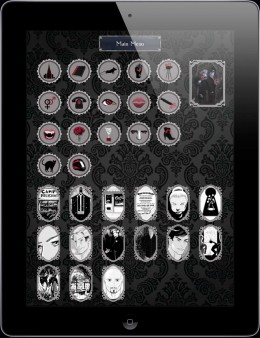 As with other gamebooks, you can try them all with enough patience. There’s a robust bookmark system that lets you page around between choices until you find the path you want. Do yourself a favor, though, and stick even the worst paths out to the end—they’re almost always good for a laugh.

Vampire Boyfriends leans further to the “book" side of the gamebook equation than Tin Man’s other releases. In classic Choose Your Own Adventure-style you focus on decisions and lack the stats and dice rolls that fill out the other Gamebook Adventures. Given the broader audience the series aims to reach, this is probably a good call. And frankly, the dice are hardly missed.

Most of that is down to the sharp writing of its author, Miellyn Fitzwater Barrows. While the book has no shortage of the usual over-the-top drama and adventure found in other gamebooks (and vampire fiction, come to think of it), it doesn’t wallow in the shortcomings of the form. It could easily have been a pandering mess of a romance novel, but Barrows’ sense of humor rises above that. Even the sexier scenes aren’t embarrassing, and a series of cute references to other popular vampire stories certainly doesn’t hurt.

Vampire Boyfriends does what it sets out to do: it’s funny, a little sexy, and seriously entertaining. The illustrations are a bit rough, the opening music a little too startling each time you start over, but those things are hardly real problems. Tin Man Games is reaching out to an audience that’s usually underserved by quality developers, and the attempt doesn’t feel remotely cynical. That’s impressive.

So set out to be the best slayer on the block, string along a series of undead lovers, or find every unfortunate death out there in vampire land. All paths are open to you, and let’s face it: no matter what you choose, you’re going to have more fun than Bella ever did. That girl wouldn’t know a good time if it bit her.