I love the idea of Party Wave (Free). Final Fantasy creator Hironobu Sakaguchi creates his own studio, Mistwalker, and sets out to build a game that captures one of his lifelong loves: surfing. It’s the sort of feel-good story that iOS has become known for, the developer who finally has the freedom to make what he really wants to make.

I’m not quite as into the reality of Party Wave, though. It’s cool in concept — a line-drawing game about bringing surfers together through all manner of dangers tied to an arcade game about keeping them all riding the swell or up in the air. But as with so many first attempts in the App Store, it bails on the controls. 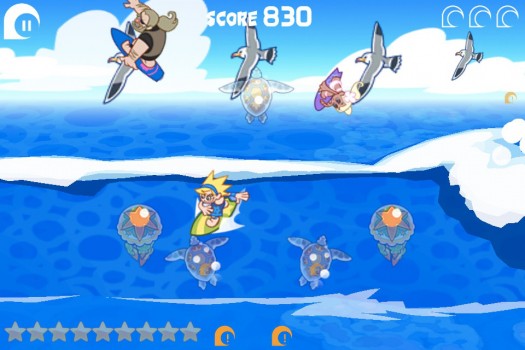 This kind of touch screen gaming is still young, I’ll grant, so it makes sense that folks continue to experiment with what works and what doesn’t. I haven’t played many games that control like Party Wave, half line drawing and half mad swiping. Usually frantic swiping in a line-drawing game means you’re about to lose control; here, it’s a necessary part of the process. That’d be okay if the game took the limits of the human hand into account, but it doesn’t.

In the first half of the game, you direct all the surfers to a shimmery point in the sea. This plays pretty much like a typical line-drawing title, but you can’t just draw a line and leave them unattended — each little surfer dude has to be watched at all times, and redirected regularly. Left alone, they’ll stall out, crash into each other or wander into a rock. This gets tough at times, especially when obstacles go from stationary to predatory. Keeping one guy from getting knocked off by a stingray while steering the rest around the reefs is a complicated task. Complicated, but manageable.

The second half is a little more chaotic. All the surfers you saved in part one ride the same wave. You need to constantly swipe each of them to keep them from bailing at the bottom of the screen. If they get near the bottom they can ride higher and jump further, but it’s a huge risk. Doable with one surfer, three, maybe five. Occasionally, though, you’ll get something like ten surfers riding the same wave, and that’s just not workable. 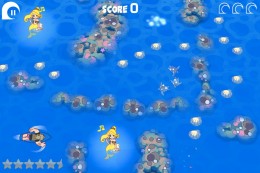 Maybe there’s enough room on the iPad to make it okay, but I’m not so sure. On the small screen, at least, I eventually found myself swiping with four fingers at a time, trying desperately to keep everyone in the air as certain levels dragged on and on. Not cool. You can only lose three surfers before you need to try again, and honestly? A 30 percent failure rate doesn’t feel all that bad. Especially when you take in the fact that every critter in the ocean is going to get in there and try to take your surfers down.

It’s a shame, because the rest of the game is actually pretty rad. Not only does Party Wave feel distinctly different, a feeling increasingly rare on the app store, but it’s full of well-considered features. I love the way it lets players skip the first half of the level if they get a perfect score, for instance; it’s a tangible benefit for doing well in difficult moments. And here’s an odd thing: if you’re quick on the draw you can gather aliens that fly by randomly and house them in a little alien living space. It doesn’t make a lot of sense, but it’s adorable for all its weirdness.

The summery music and art are perfectly matched with Party Wave’s breezy surfing theme. You could almost sit back and relax to the tropical soundtrack if that wouldn’t get your surfers killed. And Arcade mode, man, that’s a pretty good time—a timed survival mode that keeps the party going over several stages while you frantically try to keep the clock from running down.

For me, though, it all comes back to the controls. It’s painful to know what you’re trying to do, be pretty sure you should be pulling it off, and then watch a surfer stumble to his or her death nonetheless. It’s a fundamental design problem—there’s more going on than your fingers can handle, and half of it’s going on somewhere beneath them.

I applaud Mistwalker for trying something new, but original design doesn’t have to occur in a vacuum. There’s no shame in using proven mechanics to bring a creative idea to life. For all its charm and cleverness, Party Wave falls on the wrong side of the line between originality and accessibility. There’s promise and style to be found here, but not nearly enough entertainment.