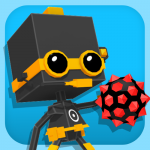 Well, that solves that mystery. Illusion Labs has released a hip teaser trailer for its upcoming “action-adventure puzzler," Blast-A-Way, revealing its premise.

From what we can tell from the new footage, Blast-A-Way is a 3D puzzle platformer that puts you in the role of savior. As a dude built of blocks, you’ll be tasked with saving cutesy creatures by blowing their cube prisons to smithereens and finding exit points. A neat line drawing mechanic should keep movement simple, thought it appears as though the core puzzle design will revolve around throwing bombs through teleporters and the like.

Blast-A-Way is due out on iPad and iPhone later this month. We’ll keep our eyes on it as it comes down the pipe, for sure.