Sometimes all you need is a gimmick. The difference between a bland game and a winner can come down to a clever idea that turns a genre on its head. Then again, sometimes a gimmick just isn’t enough.

Enter Button Brigade ($1.99). It seems so very clever: virtual buttons are often such a shoddy solution, constantly in the way of the action. In Button Brigade they are the action. They live inside the game world, and inform everything you do. It’s a neat idea, one that seems kind of special. In practice, though, that specialness rarely shines through what is an otherwise middling dungeon-crawling puzzle game. 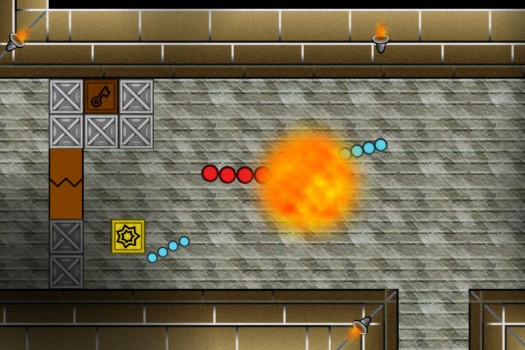 You play a robot worm, a string of four little circles with a mission: escape the factory that created you. As a worm, your tools are limited. But there are buttons, and you can press them. And you can wrap your little circles around them to carry them along.

But why buttons? That’s what I keep coming back to. The puzzles can be smart, sure, but most times they’d be just as smart if the key buttons were keys, if the projectile buttons were guns. That nagging thought sucks a lot of the life out of the game—life it doesn’t really have to spare.

The look is rough, and the over-simplified buttons and worms don’t do much to disguise that. And in an unfortunate turn of events, the game has all the downfalls of those with virtual buttons and without. Your worm is unwieldily, and tapping to move lacks precision. Shooting requires swipes that can easily be taken for taps. And to possess a game piece, you need to fiddle with the more classic sort of virtual buttons. It’s a pain. 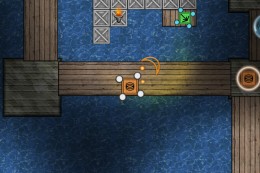 At its puzzle-solving best, Button Brigade can be a lot of fun. Every so often there’s a puzzle that makes truly clever use of the moveable buttons. Tucking a key behind the right barrier might come back to save you down the road. Or maybe you’ll blow up a blockade to get beyond it, then rewind time to bring that bomb right back. There’s thought-provoking stuff in there.

Often, though, the buttons are just window dressing on levels that need to be solved by blowing something up at the right moment, or teetering along an edge without getting knocked off. Buttons stop being buttons and start being shielded obstacles, enemies and irritations. Button Brigade isn’t much of a shooter and it isn’t much of a platformer, but it spends a lot of time trying to be both.

Once you make your way through the introductory levels, the game opens up. There are levels that delve into fire and ice, levels that play with time. The factory theme gets a little lost, but it was never the important thing. There are also time trials for the quick-fingered. If you enjoy what Button Brigade has to offer, there’s a lot of it to be had. And it isn’t a bad set of puzzles; it’s just rarely as inspired as it could be.

It’s always a bummer when a game that looks this interesting doesn’t really pan out. Button Brigade has some great ideas, but they haven’t come together cohesively. Cleverness only goes so far—it’s gotta have an end in mind. Otherwise things get muddled up, and a good idea alone just won’t save the day.

There’s merit in a game where the buttons are integral to the world. It’s just too bad that didn’t quite happen here.