Don’t know who Judge Dredd is? That’ll be 6 months, creep, for lying to an officer.

Dredd is the UK’s best-known comic book character, but if you’re not into comics then you probably only know him from the utterly regrettable Stallone movie. With another movie in the works and fan hopes high, it’s a good time for Tin Man Games’ Judge Dredd: Countdown Sector 106 ($0.99).

Judge Dredd had been arresting perps — and shooting them in cold blood — since 1977, and reflects the cold war paranoia of the time through the satirical lens of British humor. You see, the comic book is British, but the character is American. Dredd is part of the dictatorial government of post-apocalyptic Mega-City One. He (and the other Judges) are literally judge, jury, and executioner, enforcing the impossibly strict law brutally in a society where possession of coffee or sugar is a crime and unemployment is over 90%.

I’ve always seen Dredd as a parody of the American obsession with gun-toting “antiheroes" with massive body counts, and while Tin Man Games’ gamebook version of Judge Dredd captures the argot and atmosphere of Mega-City One, it wasn’t the biting satire I’d hoped for. 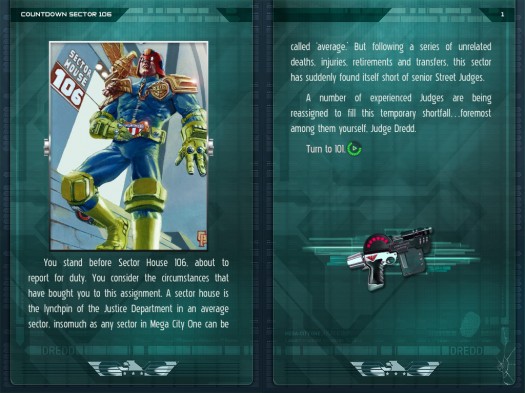 As in the comic, Dredd’s brutality is justified with the threat of annihilation should he fail. It really isn’t a spoiler to say that all of Sector 106 goes up in a mushroom cloud if you die – make that when you die, repeatedly, in gun battles and pitched melees.

Tin Man’s gamebook system is as top-drawer as ever, with everything you love from their Fantasy titles, plus art in the distinctive 2000AD style,  and a new system for firefights in which you often get to choose between taking the easy shot (but risking return fire) and going for two or more perps with one trick shot. 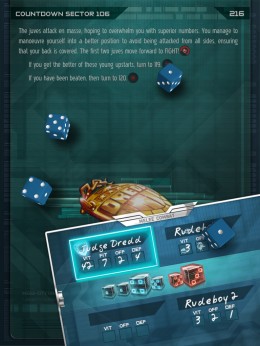 You can customize the text, choosing from a range of fonts and sizes, a feature I wish every iOS game had. Too many Universal apps are optimized for readability on the iPad, with iPhone readability an afterthought. The only flaw is the small size of the decision icons, which are about as big as a capital letter “O" (and scale with the font). It would be easy to play one-handed on a iPhone or iPod touch if the icons were larger.

Writing a game with a well-defined protagonist is tricky, and Judge Dredd makes an effort to balance player choice with the protagonist’s defined traits. The problem is that, at his best, Dredd is cold but angry, distant, and unintentionally funny. Playing from inside his head has an inconsistent feel, and I can’t help but wonder if it might have been easier to make the player a “generic" Judge and leave more of the ethical decision-making to the player.

Occasionally the game tries to reassure you that Dredd is a good guy, as when the narration stresses that Dredd is only bluffing when he threatens to break a suspected perp’s arm. More often, his merciless enforcement of the law takes the front: after saving a juve (child) from an alien cat-monster, you sentence her to two weeks in an iso-cube for trespassing in an abandoned building. In neither case do you have any choice in the matter.

The game’s plot turns on an influx of cheap-looking contraband baubles called “the Voice of Dredd", that play a range of tinny clips of the Judge’s catchphrases and feature something a bit like a Judge Dredd bobblehead on top. One perp says you can flick the Dredd-head when you’re annoyed, and nearly gets an extended sentence for his cheek.

The humor hovers on that level, a mix of pop-culture references, tough guy ‘tude and “Jackass" worthy stunts. Maybe that, combined with shooting punks and rudeboys, coshing juves, and riding a AI motorcycle equipped with machine guns and a laser, is enough. If you’re into the Judge, you’ll recognize him here. It just isn’t one of his finest moments.