Neverland is a world that can only seem to scrabble toward peace, ruled in turn by demons and humans who just can’t seem to find common ground. Spectral Souls (Free) brings us in at the start of an inevitable conflict between the two, when the Imperial Neverland Army of demons sets out to crush the rebellious Reformed Simba Empire of humans. This being a strategy RPG, it’s pretty obvious that we’ll be siding with the plucky and familiar humans, no?

Not quite. Spectral Souls does something a little unconventional: it tells us both sides of the story. It puts us in the shoes of the Neverland Army as it struggles to maintain its dominance. It sides us with the Simba Army, where we struggle to take back human territory and win freedom from our demon overlords. Eventually, it also introduces a third point of view—an idealistic group that hopes to find another way through this conflict. So which side is right? That’s left up to us to discover and decide, one moment in history at a time. 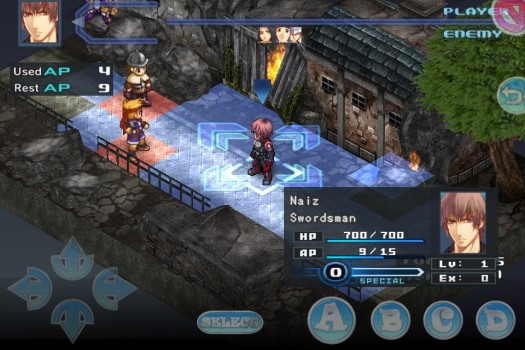 This departure from black and white storytelling is refreshing, as is Spectral Souls‘ penchant for introducing characters that are more than just class templates. As you spend time with each army, you won’t be creating your team from scratch out of a few named characters and a stable of blank slates, you’ll be getting to know a group of individuals with their own histories and personalities. Yes, the game succumbs to RPG tropes on a pretty regular basis and the characterization can be thin, but it’s a pleasant surprise to run into even a flawed approach to nuanced storytelling and character development. 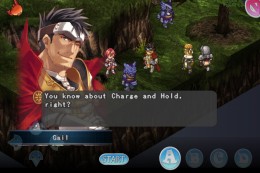 The game adapts as you play, customizing a tale based on certain actions. Sometimes your tactical decisions affect how the story turns out. You might visit a town at the right point to meet a new character or miss something based on which locations you visit first. And every so often you come to a pivotal point in history, a Historical Moment when you can choose through whose eyes you want to see events unfold. All these things shake out to an ending that is the product of your decisions and the the sides you choose.

Now, as much as I like a game with a solid story, Spectral Souls spends much more time in combat than cutscenes. And while combat isn’t as complex as it can be in the best strategy RPGs, it has some depth of its own. The basics are nothing if not familiar, though. Maneuver a unit next to an enemy, launch your attacks, and move on to the next turn—you know this part.

Hold attacks and Charge attacks mix things up. Hold attacks let you unleash a flurry of different blows at once. A side effect of that is that there are many ability combos to discover—attacks that, when released in the correct order, combine into something new and deadly. Two Slashes in a row becomes a Triple Slash, for instance, doing extra damage than two Slashes released separately or divided by a different attack. Charge attacks take that complexity and pump it up further, letting you hold any number of attacks between multiple characters, unleashing them all at once. These can be devastating, but there’s a risk: if any of the characters involved in the charge are hit by an enemy, the whole thing is cancelled. You have to keep an eye on turn order and speed to make this really work. 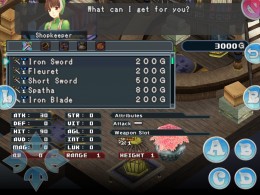 That spirit of experimentation extends to the game’s other systems, which include item and ability synthesis. You can learn to create a powerful new weapon from a recipe, or you can throw caution to the wind and try to create something on your own. It’s a great way to power up. Similarly, you can play with your characters’ classes when they reach a high enough level. You’ll need to make careful use of these systems and the free grinding areas—this game absolutely refuses to go easy. The AI can be rigid, but the Spectral Souls makes up for that with sheer numbers.

If you’re a fan of large-scale Japanese RPGs, you already know that there’s a price tag attached to them on iOS. This is no exception. You can try out the first few battles for free, but then comes the paywall, currently sitting at $13.99. This may be too steep for some, but how many opportunities do we really have to play massive SRPGs on this platform? Not nearly enough for me to quibble about price.

Now, I’m not saying Spectral Souls is perfect by any stretch. The interface is something of a nightmare (a common side effect of bringing complicated console titles to mobile). Everything is covered in virtual buttons, you have to paw through pages of tutorials to figure out what most things do, and in hours and hours of playing I still haven’t quite grown comfortable with some of the combat controls. The game’s map is also a mess, with multiple levels that never show you where you can go next and with whom with quite enough clarity—especially when you’ve stepped away from the game for a while.

As dreadful as all that sounds, though, these things are mostly small irritations. They pop up more than I’d like, but they don’t take much away from the overall experience. The original PSP version had it much worse, panned by critics for what were reportedly atrocious load times. Don’t let that dampen your enthusiasm; the iOS version may have its own problems, but load times aren’t among them.

It’s hard to live up to the competition in the strategy RPG arena—Final Fantasy Tactics ($13.99) is one hell of a game. If you have room in your heart for more than one SRPG, though, Spectral Souls is well-deserving of a place in your collection. From the cleverness of its systems to the scope of its story, this title stands out. Give it a chance. When you decide you need more help with the intricacies, our discussion thread is a great place to visit.