iOS puzzle games are $11.88 a dozen these days, which is why it’s such a delight to find a game that rises above as well as Ichi ($0.99) by Stolen Couch Games, does.

You’d be forgiven for thinking the screenshots look like a simplistic mini-golf style game, but you’d also be foolish to pass up the opportunity to take it for a test drive. Ostensibly a simple “guide the ball to pick up the circles" game, Ichi has a few interesting play mechanics that set it apart from many similar puzzlers, and a couple cool features that give it a high degree of replayability.

Ichi advertises itself as a one-button puzzle game, which is essentially true. Once you’re prepared to try to solve a given level, a tap of the screen sets the “ball" off in the pointed direction. Your goal is to pass it through a series of collectible hollow rings, with the level ending once you’ve collected the last one. 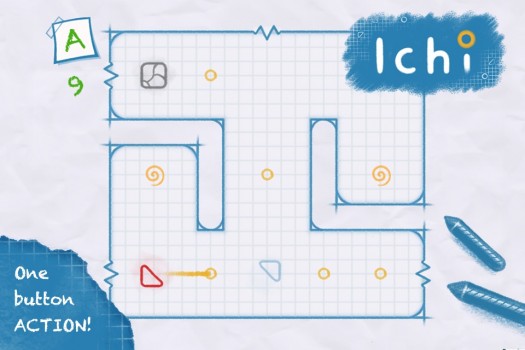 There is definitely a degree of hand-holding as you get accustomed to the nuances and tricks that make the game so unique. Puzzles are solved with a single tap here, a tap-and-hold there, drawing on a gradually increasing bag of tricks that really require you to bend your mind in a different direction as the levels progress.

To begin with, tapping the screen will cause any red triangles on the board to rotate one turn clockwise. Once this basic technique has been learned, new transparent blue rectangles will become solid or insubstantial with a single tap. Easy to understand at first, but things get considerably trickier and more hectic when both are present on the screen. Add to this the easy-to-forget trick of drawing a pencil line with the ball by holding down your finger (which creates a one-shot wall) and the applications and possible solutions become nearly endless.

The main challenge with Ichi isn’t so much solving a puzzle – with the tricks at your disposal, solving puzzles becomes largely trivial. The real difficulty comes in solving the puzzles in as few taps as possible. Your progress is represented with a letter-grade, A being best, B being okay, etc. A number under your current letter grade shows how many taps you have left to keep that grade, a continual reminder to think outside the box. Many of the levels seem simple to solve, but extremely challenging to solve within a set number of moves.

Later levels introduce environmental gimmicks, like a splitter that separates your ball into two, portals that teleport the ball, or a device that disables certain elements of the puzzle if your ball passes over it. These bring a new level of mental flexibility to the game, and are a lot of fun to work with.

The game has been updated since release with more official levels, but for a new-level fix you are given endless possibilities. Ichi includes a fully-featured level editor which allows you to create your own unspeakably devious puzzles, as well as an upload feature that lets you share them with the world. You’re given full access to all of the gadgets and environmental tricks, as well as the ability to build/delete walls, set starting points for your ball, and even begin from a set of starter templates.

Of course, on the flip side, you’re also able to download other user-created puzzles, many of which are absurdly challenging. For 99¢, this is absolutely a puzzle-fan’s no brainer.