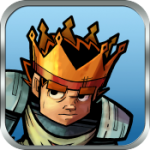 Pocket Heroes ($0.99) is a game we’ve been following and looking forward to for some time. If you miss the weekly tabletop RPG session you had in college, or if you’d be on WoW if only you had a dozen or so more free hours in the day, then Pocket Heroes is looking for you.

Pocket Heroes is intentionally bite-size. Unlike other “pick up and play" RPGs that I don’t “pick up and play" because a 5-minute coffee break can easily turn into my entire lunch hour, I’m not afraid of opening Pocket Heroes. For that same reason, the game demands a little patience: you take one turn at a time, on average moving about five spaces and taking two actions (such as attacking twice), then you send of your turn and have to wait for the other 1-3 players in your party to send in their turns before you get to go again.

If a turn ever takes more than two minutes to play, it’s because you’re really getting into the in-game chat. 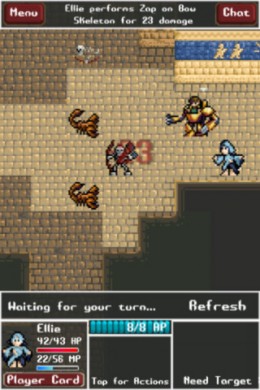 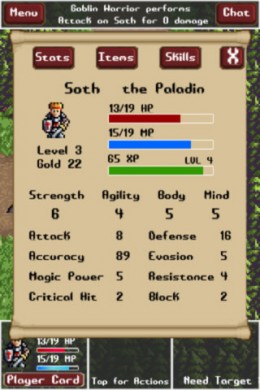 Though the time scale couldn’t possibly be more different, there are moments when playing this game reminds me of crowding around a Gauntlet machine with my friends back in the day. Play is close-in and intended to be collaborative in a casual, friendly way. Despite appealing to MMORPG players, Pocket Heroes gameplay takes all of the right lessons form casual asynchronous games: there’s no waiting for re-spawns, no carefully coordinated raids or massive battles, and functionally no grinding (Hallelujah!), just quick bursts of fun.

Though the story is nominal, the game does have a bit of a tabletop feel, due in part to the fact that each level is, as the developers advertise, “hand crafted". This means that the challenges should always be appropriate for  the size and level of the party. If your party composition is completely off-balance (no healing in a party of four, perhaps) or you have a Leeroy Jenkins in your midst, you might all die, which means restarting the level, but otherwise, there is no grinding. I’ll say that once more: no grinding. 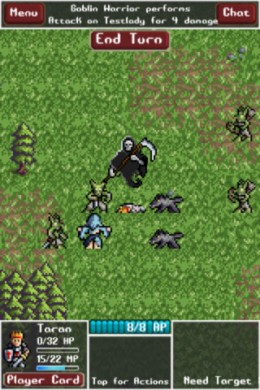 The game isn’t perfect: the completely custom levels mean that each game presents the same challenges every time, but this is a party-based campaign, so playing “through" is intended to be a long-term experience. It also means that the game isn’t at all “open world" or “sandbox", but as long as you know that, you won’t be disappointed.

App Store ratings for Pocket Heroes have taken a beating because of a design decision: the game is multiplayer only, and only with your Game Center buddies. Because of the negative feedback, F5 is adding random play, but that will create it’s own problems. Each turn is short, but unlike Words With Friends ($4.99), a game of Pocket Heroes is a long-term commitment. Who you play with really matters. If anyone stops playing, the game dies.

Fortunately, there is a Touch Arcade forum thread for people looking for fellow adventurers, and another one for people willing to put more effort into planning a play group before beginning a game. Or you can just badger your old roleplaying chums until they buy the game (and iPhones, if necessary).

I have a few minor quibbles with the game: at present, if you roll poorly in combat, you can re-sync your turn and try again (being able to undo movement is good – being able to re-roll attacks encourages “cheating"), and I’m not sure how I feel about the option to buy in-game gold through IAP. I’d rather pay more for the game up-front and know that gold drops are balanced. When they implement random players, I hope they also add some sort of “party management" system allowing inactive players to be dropped and replaced.

Despite it’s flaws, Pocket Heroes is well worth the wait, and with all of the additional content F5 has in the works, it may well have found a permanent home on my iPod Touch. Additionally, the guys at F5 Games are hard at work supporting the game, with an update already in the works.