WarGames: WOPR [$99¢] is a tile matching game that has you linking up as many tiles as possible in order to do damage against your opponent. In the game, you play as a supercomputer named WOPR with a machine brain so advanced that it can boil down a real-world nuclear war reaction simulation to a trivial matching exercise where the currency is RAM and the most important tiles you can match are nuclear warheads.

The WOPR supercomputer’s inability to see its simulation as more than just a game is one of the more interesting aspects of WarGames the film. Released in 1983, it’s a movie about a hacker who accidentally taps into the WOPR and buys into the supercomputer’s logic. Thinking its simulation was created purely for entertainment, the hacker and a friend start a real-life war game with it and the WOPR responds to their pretend moves by prepping actual silos.

It’s rare when a licensed game “gets" its source material as much as WarGames: WOPR does. But regardless of quality, the thing all licensed games always get is attention, which is the reason why this game exists. Creator Be-Rad Entertainment tells TouchArcade that the decision to make a game based on a licensed property had a lot to do with all the noise on the App Store. The studio needed something to stand out, and it had an exciting idea for a prototype. 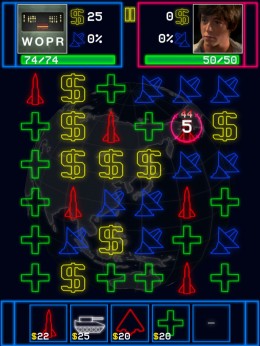 “As an indie game developer it’s difficult getting noticed so I was trying to figure out ways to reach a larger audience," Be-Rad’s Brad Johnson tells us. “A year ago I was playing Army of Darkness Defense and kept thinking, man, I really wish I could make a game based off a movie, that would get people’s attention."

“I saw what MGM was doing in the mobile space and started looking at their other titles. WarGames seemed like a good match for the prototype I had been working on so I fleshed out the concept and pitched it to MGM. They liked it, we signed some things, and then I started development."

It was more like a divine match. While Johnson was browsing movies that clicked with his ideas for a brand new video game, WarGames just sort of “popped" out at him. The movie and the prototype went hand-in-hand like nukes and silos.

Johnson describes his connection, pre-game, to WarGames as a series of fond memories of several scenes. I experienced the same thing when we started talking about his game. I had to re-watch it because I couldn’t recall significant scenes, but I did remember the ones that showed Matthew Broderick hanging out at his computer and playing with a phone. Weird, I know.

“Prior to making the game my only connection was having fond memories of several scenes in the movie," Johnson says. “For some reason I don’t even really remember watching the whole thing until I was a teenager but I occasionally thought of several parts throughout my childhood."

He describes some scenes he remembers. “Mainly the modem being used to hack into other computers, the part where some lady put some other guy’s gum in her mouth, and a flying pterodactyl. You can probably guess as to why those might stand out to an 8-year-old." 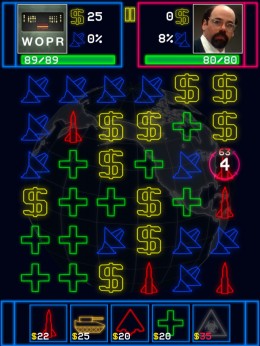 WarGames the game is brimming with elements from the movie. On a visual level, it gives you the sense that you’re interacting with an old thinking machine. The text, the scan lines, the graininess, and the vector art are solid illusions that speak to what the WOPR was in the film. Story-wise, WarGames: WOPR loosely follows the plot of its source material. Each set of chapters incorporates some dialogue from the film, and you play against characters from the movie.

Playing off what the WOPR could do in the film, you’ll be able to rally stealth fighters and tanks by matching money and radar tiles. Your opponents drop tiles that you’ll need to annihilate or weaken. Warheads, for example, will take several health points away from you if you don’t match them to other warheads or use a tank or a grenade to soften their blow. Later in the game, you’ll need to destroy enemy health tiles and figure out ways to obliterate other obstacles.

Getting the prototype and the theming to click instead of clash as well as it does was a process, Johnson tells us, as it took several iterations to nail it.

“It was a long process getting WarGames: WOPR to resemble the movie," Johnson says. “There are three main elements we had to do well to get the game to feel similar to the movie which are the graphics, sound and story. It took a while to come to that conclusion and get them all right though."

“For example, the visuals needed to be re-worked to fit with the theme and tone of the movie. “At first I wanted cartoony graphics — like Angry Birds, Cut The Rope, etc — simply because that’s what people respond well to on mobile platforms. The cartoony graphics looked great, but we realized it just wouldn’t work because they didn’t scream WarGames at all."

“Sound was a lot easier simply because most of the sound effects are pulled directly from the movie’s audio track. The story was a whole other, uhh, story!" 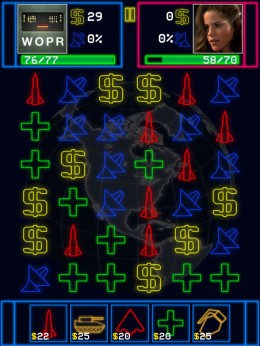 “At first the game was based around the idea that you’d be playing as certain cities battling other cities. It was cool because the game had a cold, destructive feeling but it just wasn’t a memorable experience. Plus it would have been much harder to write an interesting story if you’re playing as cities."

“At one point a friend suggested you play as the WOPR computer and battle characters from the movie. This immediately stuck because it gave a great spin on the whole experience since you’re not playing as the obvious choice, David Lightman’s character, and this way the game’s story could follow the movie’s much more closely. Rolling with that idea the story was much easier to put together."

It isn’t lost on Be-Rad that there was another way it could have tackled WarGames the game. It could have made a literal version of the WOPR’s almost completely text-based thermonuclear global war game, for instance.

It’s impossible to pin down all of that game’s mechanics, but the movie showed some glimpses of how it worked. In one scene, for instance, we saw Broderick and his pal, played by Ally Sheedy, drop warheads on a series of cities one-by-one. Across several later scenes, the WOPR took its turn and queued responses. These took several forms, though the most memorable was the scattering of pretend submarines. The WOPR also produced casualty reports and apparently spit out an exhaustive listing of statistics.

Johnson says he didn’t go at the game this way because there’s already a nuclear war simulation game out there. More importantly, though, a heavily text-based simulation game isn’t the kind of title he wanted to play.

“There are a couple reasons I didn’t try to recreate the game from the movie. First of all, Introversion unofficially made the game already. It’s called Defcon. They did a great job with it so there’s no point in making that game again."

“The second reason is that I didn’t want to work on that type of game since it’s not really the type of game I want to play. I’d much rather spend time making a product I’m passionate about because I’ll put much more effort into it and it’ll turn out to be a much better game in the end."

It did. The integration of the movie’s story, theme, and the film’s light-hearted tone are some of the most impressive features of WarGames: WOPR. It feels faithful without being crushingly cheesy. It’s doubtful that Be-Rad would be able to strike a similar balance if WarGames: WOPR was like the movie’s text-based game about killing people or mobilizing armies.

As for the actual game, the core puzzle game experience is solid; the action is fast, the controls feel great, and its strategy is fulfilling — especially when you hit the later levels, as the scenario design pushes you to think around objectives instead of matching.

WarGames: WOPR is a total package, in other words, as it seamlessly integrates the movie and a matching experience into one interestingly themed experience. While this may have been at one point just a prototype looking for a property, Be-Rad has managed to create something faithful and great. And that’s cool.