The first thing One Man Left Studios’ Outwitters (Free) taught me is that I rely far, far too much on Hero Academy’s “undo" button. The two games seem similar at first—both asynchronous turn-based strategy games, both with their own brand of cute, colorful graphics—but sit down to play them and you’ll find the experience dangerously different. For starters, each move you make is set in stone.

This doesn’t seem like such a big deal until you think of other asynchronous multiplayer games. Words With Friends ($4.99) lets you mess about with letters and even try to submit words until you get something that works. Ditto with Poker Pals (Free)—you can place your cards every which way to see exactly how you’ll earn the best score. It’s almost always the same process: experiment, commit, submit, and wait. And you know what? It makes us lazy. Yeah, that’s right. I said it. 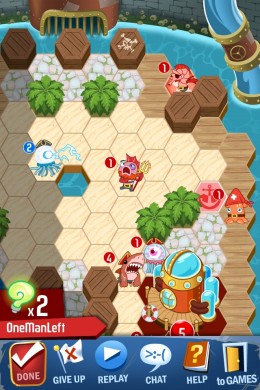 Outwitters will beat you into shape. It has to, you see, because much of its strategy is wrapped around three little words: line of sight. It would be all too easy to pop out runner after runner, explore the map and then reset with your new, prescient knowledge of the enemy’s positions. Obviously that can’t be allowed. But when it comes to actually playing, the implications of that choice feel downright staggering.

But let’s back up a bit, because you might not have read our primer or listened to the accompanying podcast and may have no idea what I’m talking about. Here goes: the goal in Outwitters is to destroy the enemy’s base, which is rather flimsy with just five hit points. You have your pick of three teams. One, the piscine Scallywags, is included for free (and that generosity has done wonders for building the game’s player base already). The other two, the robotic Feedback and the adorable, umm, Adorables, can be purchased at a reasonable price. The teams are nearly identical aside from cosmetics. There is just one difference: the top-tier, most expensive unit for each has unique stats and abilities, and can change the game on the spot.

Outwitters is quick to load and responsive, and it boasts a great-looking interface. It has League rankings and the associated leaderboards. You can play 1-on-1 or 2-on-2, with Game Center friends or random strangers. You can also do it pass-and-play style on one device. You have a few units to begin with, spread out around your base on the hex grid playfield, and a set number of points, or “Wits." You live and die by your Wits, so expect that number to become your almighty. 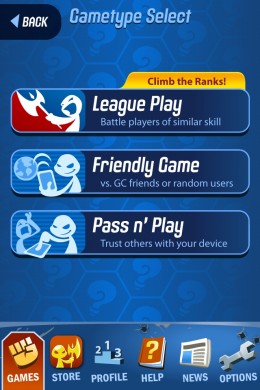 Everything you do costs at least one Wit. You can move a unit up to its maximum speed for one Wit, and you can attack an enemy unit in range with one Wit. You can also spend Wits to summon new units, and those cost anywhere from one Wit to seven, which happens to be two more than you earn per turn. That’s okay, because you can save any you don’t spend.

There are a few other limits to what you can do in a given turn. Each unit can only move once and act once per turn, no matter how many Wits you have to throw at the problem. And you can only summon one unit per turn at any single summon point.

This makes for an interesting mix of freedom and restraint. None of your units, even the speedy Runner, can make it all that far in a single round, so you can’t really rush the enemy. But if you want to save up Wits and summon your ultimate unit early on, you can. Or you can pump out Medics to buff up your Heavies. You can hang back, explore, snipe from afar—all valid tactics assuming you have the Wits to pull them off.

Challenge one is to know in advance exactly what you’re going to do and exactly how much it’s going to cost. I’ve lost games before because I neglected to save the one extra point I needed to actually use my seven-Wit Scrambler after summoning and moving it. So much for brainwashing that enemy—it just stood there blank-eyed and dull-witted while its foe knocked it off with a tap. Whoops. 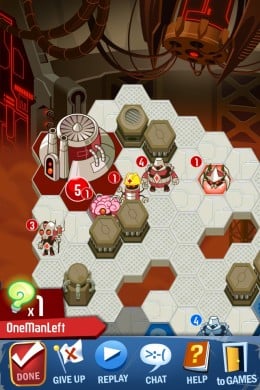 Challenge two is to control the board. First up, you want to make sure you control as many of the Wit generating positions as you can. There’s two or four on every map, so you can give yourself a huge advantage by holding them. But you also need to make sure you can see as much as possible, because letting your enemy position in the dark is a good way to get a face full of sniper. Or maybe you want to block up the enemy’s summoning points by standing on them—if you’re strong enough to resist their counter attack. All of that is important, but it can also distract from the goal: destroying the enemy base. Don’t forget to destroy the enemy base.

None of the maps are very large, and you’ll rarely have more than a handful of units out at once. This keeps things relatively quick; it’s hard to sustain a stalemate for long. Adding in a second pair of players does complicate things, but even 2 vs. 2 games go by quickly. Assuming, of course, that your opponents (and allies) take their turns at a good clip. If they don’t, there’s one more major stumbling block to get past: your own memory.

When you’re playing a handful of games of Outwitters, it’s easy to forget exactly what you were planning. That’s a problem with any similar asynchronous game, though, and I’m sure you can learn to handle it as well as chess players do. The bigger problem is keeping track of enemy units. You might see where the enemy is hiding a sniper, but then your scout gets knocked out of the game. No big, you still know where it is—until two days later when you take your next turn. The darkness becomes a mystery pretty quickly.

That’s not a bad thing; it’s what separates the proverbial men from the boys. Good players will know exactly how to use each of their units—how far they can move, how far they can shoot, how long they can live. Better players will also know the maps and how best to control the most important points. And the very best players? They’ll know where you are at every moment.

The more I play Outwitters, the more I become convinced that it’s a heck of a game. The only serious problem at the moment is the people who refuse to finish league games if they’re about to lose (and we call those people “jerks"). It’s possible the ultimate units are unbalanced, and it’s possible the league ranking and matchmaking won’t work well in the long run. It’s too soon to tell for sure. But the basics are in place, and they’re fantastic. There’s room to plan, to strategize, to pull off great things and show off real skill.

But the game can turn on you in an instant, and it often comes down to that one little thing: a momentary lapse in attention, an ill-planned move, a stumble into the darkness. A mistake. When you play most asynchronous games, you’re playing someone who may be able to play perfectly—once they reset and try every permutation of a move, at least. When you play Outwitters, you and your opponent are both subject to making mistakes; to err is human, after all. And that one little thing raises the stakes more than anything else could. So join the fray, check it out—then hit our discussion thread to make some new friends to kill.