The life of a goldfish is often short. Carried around in plastic bag on a hot summer day, flopped out of its bowl, eaten by another pet—we don’t put much value on their little lives. But there may well be no goldfish as tortured as Yello. To recap, Saving Yello ($0.99) saw the little guy yanked out of his bowl, over and over, made to travel through all manner of obstacles to survive. Now, in Chasing Yello (Free), he finds his freedom— briefly and painfully, before coming to a dramatic end.

The only thing you can do for the poor fellow is make sure he survives as long as possible, collects as many stars as possible, and enjoys his freedom for as long as he can. When you think about it, endless runners and their ilk are kind of morbid. Best not to think about it, then. Best just to enjoy the game and put the fate of poor Yello out of your mind. 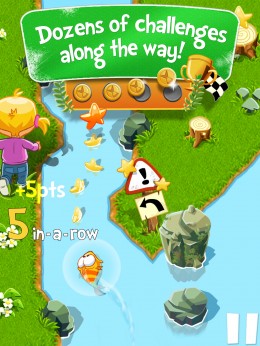 That’s not all that hard; Chasing Yello is pretty fun. It has all the right ingredients: cute protagonist, high stakes, something to collect, leaderboards. And if I’ve learned nothing else from the iOS market, I’ve learned that many of us have apparently insatiable appetites for endless games.

How does this particular one play? Rather routinely. You tilt your device from side to side to control steering, swipe up to jump over obstacles and slide down to swim under them. Some, like logs, can be approached either way. Others, like rocks, will end with a splatter if you choose poorly. You can also unlock the ability to swipe side to side for a quick dodge if you can save up some 10,000 stars.

Stars are everywhere—you spend the entire game following trails of them, so they aren’t particularly hard to save up. But 10,000 is still quite a few, and you’ll have to save up that many three times over if you want to unlock all of Yello’s special skills. That’s not counting the power-ups, which you can unlock and level up to find randomly while you play. It’s almost exactly Temple Run’s set up, and that’s fine. It’s just starting to feel a little played out.

That’s the only problem I have with Chasing Yello. It’s competent, funny, and cute. It’s even fun. But if you’ve played any number of other runners, you might have a hard time staying interested. It has the same mission system that Tiny Wings coined, right down to the score multiplier that increases as you advance. It play a lot like Temple Run, if a little more vertically. And the IAP is pushed aggressively, something I find a little tasteless in a paid title. Free stars for watching videos, free stars for social sharing, and if you can’t get enough free stars you can always buy more.

The game has its own charms, though. Yello is still adorable, and still gets roughed up with all manner of vicious deaths. And the little girl who occasionally chases you down with a net or threatens to cook you for dinner adds a pleasant tinge of terror to the proceedings. The whole thing is morbid, but that’s certainly not a bad thing.

So here’s the scoop: if you’ve played Saving Yello and you want to know if this semi-sequel is fun, yeah, it’s fun. It’s a very different sort of game, but it’s a blast. But if you’re coming at it wondering if it stands out in the endless crowd, well no, it really doesn’t. It’s not that it’s bad, or even worse than the competition. It just doesn’t bring anything new to the table, and the table is getting very, very crowded. If that’s not a problem for you, then dig in. I hear the special tonight is goldfish flambé.