Last November Adult Swim launched Major Mayhem (Free), a Time Crisis-esque arcade shooter with a welcome dose of over-the-top personality and fantastic production values. We liked Major Mayhem pretty well in our review, but did feel it was a bit mindless and repetitive. It was fast and fun action with great eye candy, but it got old pretty quickly.

Well Adult Swim is looking to fix that with their latest update, which is ridiculously huge and adds some much needed variety to Major Mayhem. The update includes three brand new modes, an in-game shop with tons of new weapons and helpful items, tons of new cosmetic options for tricking out your character, Game Center achievements, and new iPad Retina support. 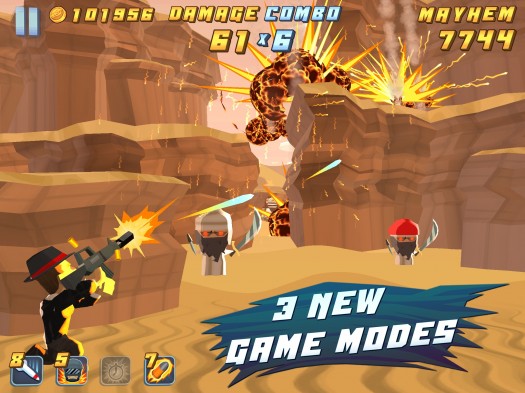 First off, the original game mode has been rebranded as Classic, and there’s now 3 additional new modes. Timebomb mode puts you into a random scenario for one minute to try and earn the highest score. Arcade mode leads you through a string of scenarios in a random order, making for some sporadic difficulty (in a fun way). Finally there’s Survival, which tasks you with playing through the campaign missions with just one life and no ability to continue. 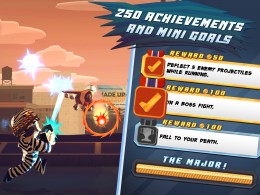 Another cool addition in this update is a meta-mission system just like that of Jetpack Joyride, including the ranking up aspect and everything. I love when games do this, as it’s constantly giving you something new to immediately aspire to even in short gaming sessions. The mini-missions here are well thought out and fun to chase after.

The next major change to Major Mayhem is the addition of an in-game currency system. There’s a slew of new shop items to buy using coins earned by playing the game or by buying as IAP. There are now 20 different weapons and weapon variations that include ones that can fire through barriers, a bad ass plasma rifle, an auto-shotgun, and a cannon that shoots chickens. Yes, chickens. There’s also tons of new cosmetic items to outfit your action hero with, which is way more fun than I expected it to be, and there’s also some consumable power-ups to buy with your in-game cash like continues and more powerful bullets. 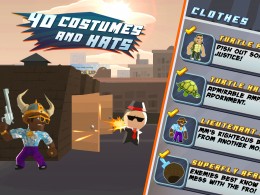 Now, I know there are people out there who just cringe at the mere mention of freemium, but I think Adult Swim has nailed it with Major Mayhem. All of the awesome new weapons and items can be earned simply by playing and earning coins. Yeah, it will be quite a grind before you’ve bought every last thing, but you earn coins at a fairly quick clip just by playing through the 4 modes.

If you decide that you just have to have something now, you have the option of several coin packs available as IAP (as well as a coin doubler option for 99¢, which can also lessen the grind a bit). I fell somewhere in the middle, and picked up the coin doubler and the smallest coin pack to buy a few new things to check out, and now I’m just having fun saving up for some of the more exotic items in the shop. Also, if you had bought the game previously for 99¢ when it was a paid title and it’s still installed on your device prior to updating, then you’ll get a nice 25,000 coin bonus. 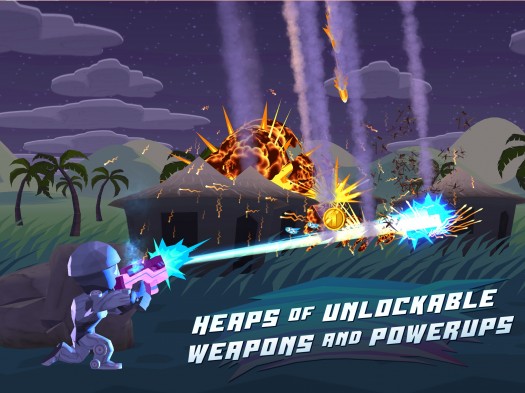 Lastly, Major Mayhem has finally received the oft-requested Game Center achievements, a full 100 of them, as well as Retina Display support for the new iPad (and it looks simply amazing, by the way). Oh, and one more thing. According to the developer in our forums, that ugly “Free" banner on the icon should be a temporary thing, so don’t fret.

If you were a Major Mayhem fan before but had gotten your fill, definitely check out this latest update as it almost feels like a completely new game now. If you’re a newbie then there’s no reason not to check it out since it’s now free, and has quickly shot up to become one of my favorite arcade games with the addition of all these new features.