Closer in tone to Duck Hunt than Counterstrike, Major Mayhem bears more than a passing resemblance to games like Virtua Cop and Time Crisis. Here, movement is largely independent of the player. You’ll be transported to the next zone automatically once you’ve killed a sufficient number of enemies.

The shooting breaks down as follows: See enemy. Tap on enemy. Earn bonus points. Avoid projectiles that have red auras. Profit. (Okay, fine, so there’s some rudimentary platforming mechanics and a number of weapons to pick through, but still.) See? Nothing we haven’t heard before. Nonetheless, there’s probably a reason as to why this formula has been reiterated time and time again. It works. 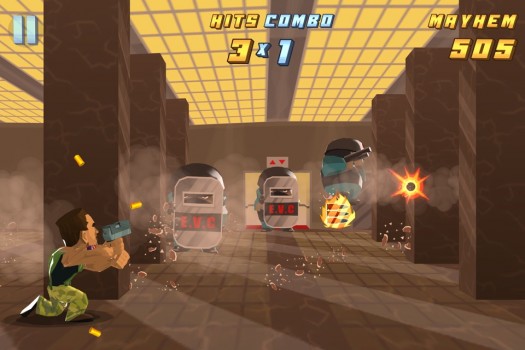 Silly, over-the-top parodies work as well. Put those two together and you’ll have a winning combination. Or Major Mayhem. Whichever comes first. As you might have already guessed, Major Mayhem doesn’t take itself too seriously. It can’t. It has a protagonist that looks like every 80s All American action hero rolled into one. It has players gallivanting across the world to save both humanity and the eponymous lead’s girlfriend from the clutches of the Evil Villains Corporation. If it took itself seriously, I would be extremely worried.

Unoriginal as the premise might sound, it’s also the perfect excuse to take on a swarm of ninjas, men in well-pressed suits, katana connoisseurs and to ogle Major Mayhem’s slick production values. Fully 3D, the visuals are crisp and pleasing to the eye. Colours are bright. Animations are fluid. Controls are delightfully responsive and simple to learn.

They’ve put a lot of attention to the small details as well. For example, you get combo points whenever you flambe poultry in rapid succession. I also especially liked how damage is shown. The first hit removes the Major’s hat, the second his shirt – it’s a simple, effective way of providing feedback. (Don’t worry, it doesn’t ever venture out of the realm of good taste.)

Aside from all that, I don’t have much more to say about Major Mayhem. It’s a brainless sort of fun, the kind you can easily waste many unsuspecting hours on. So, if you’ve been aiming for something new to keep you occupied during a particularly laborious stretch of the day or during your daily pilgramage to the Porcelain God, you should really give Major Mayhem a shot. (See what I did there?)