If you’ve seen the trailer, you might think the mulletted hero of Unstoppable Fist ($0.99) is a bit of a brute, all fists and fury. Not so. Yes, he fights, and he does so with all the intensity of an early 90s action hero. But this is no ham-fisted flail—when played correctly, it’s more of a dance. Each kick is performed with timing and grace, each punch is delivered in a deadly rhythm. Inevitably, that’s when a chicken smacks him in the face.

Or maybe it’s a scorpion, or a flying zombie head, or a puffer fish. There are endless forces arrayed against our hero, both natural and otherwise. So you kick, and you punch, and you kick some more, hoping to survive but knowing it’s not going to happen. “Unstoppable" is an exaggeration; you’ll be stopped again and again and again, and your only hope is to do better next time. 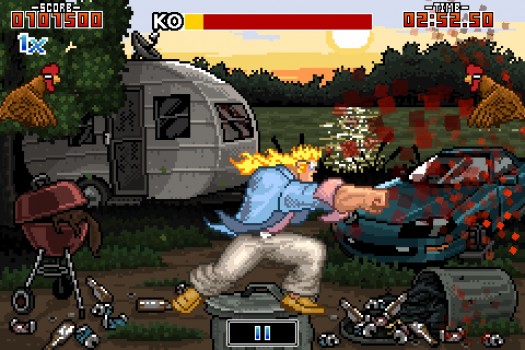 There is something of the rhythm game to Unstoppable Fist, though it’s not about the (unquestionably rad) music. Each enemy you kill has its own rhythm and timing, and matching it is the only thing that will keep you alive. The edges of the screen are divided into six zones: upper, lower and middle on each side. Tapping one will lash out a punch or a kick in that direction; both sides together is a double attack. There are also swipes that give you uppercuts and roundhouse kicks, so experiment. But the real trick is to make those punches and kicks come in contact with whatever is flying toward you. Easier said than done.

Bats hang back for a moment before flying in for the kill, while pirhanas come straight in. Snapping turtles take two hits, and chickens fly in from both sides at once. If you’re going to be a proper badass, you’ll have to memorize all the patterns. You’ll also need to know exactly how far you can punch and how close enemies can get before carving away a piece of your health. 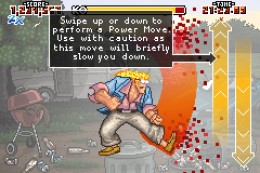 On Easy mode, this isn’t so bad. You can slip into a rhythm well enough, punching at the moment the enemy crosses that invisible line of death. This lets you earn crazy multipliers and an even crazier high score; the more enemies you hit without missing, the bigger those numbers get. As you progress up to Medium and Hard, on the other hand, things get nasty.

If you’re playing Unstoppable Fist for cathartic violence, you might want to stay well within your comfort zone. There’s a thin line between challenging and unbelievably frustrating in this game, and you’ll find moments when you simply can’t kill everything in time. Then it starts feeling like the controls aren’t keeping up, and before you know it it’s phone-through-the-wall time.

You can survive a few failures, if not many. And there’s a saving grace: good ol’ American apple pie. If you can manage to suppress all your punchy, kicky instincts and let a piece of pie hit you, it’ll heal you up some. And that’s how you do it: avoid damage and heal up between hits, get yourself as high a score as possible, and then die. That last part is optional, but let’s face it—it’s also unavoidable.

Unstoppable Fist is painfully cool if you’re into the early 90s. The pixel art and over-the-top hero would be right at home in the days of neon and hair bands. If you’re playing in your weight class, it’s also pretty fun—when you’re in the zone, this game can be a love song to violence. But it can also be kind of a drag. Endless punching sounds pretty good, but eventually even violence gets old. So how motivated are you by getting high scores? There are also a whack of Game Center achievements to earn, and they’re good ones, but it just doesn’t feel like enough for real longevity.

Sometimes you need to punch something, and Unstoppable Fist is good for those times. Five or ten minutes of being down chickens and scorpions can cure any woe, especially if you let yourself sink into the absurdity of it all. But for longer-term excitement, you should probably look elsewhere. There’s only so far a dude standing on a trashcan can go.