In late 2009, one of the most popular games amongst our forum members was Rocketcat Games’ Hook Champ (Free). Each level in the game had various hidden tricks and nuances that once discovered could shave a bit of time off your completion score, and because of this a fairly heated competition broke out for several forum goers all vying for spots on the leaderboards.

Amongst these elite players were two who go by the forum handles of mikeg123 and qpawn. Through this competition a friendship was born, as well as a common interest in “speedrun” style games. After talking further, the pair – both named Mike incidentally – discovered that one had a small background in programming and the other had a bit of experience in creating pixel art. They then decided to set out on a journey to create their own pixely, speedrun-centric platforming game in their spare time, and thus Beavertap Games was born. 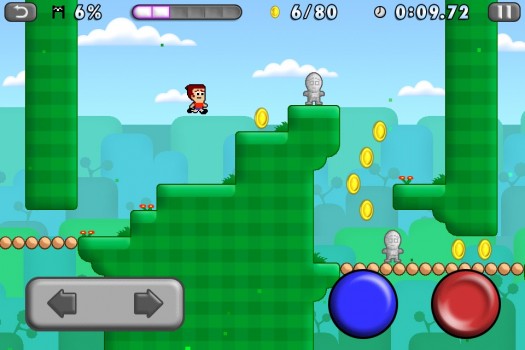 Their platformer project is called Mikey Shorts, and it’s getting into its latter stages of development and getting pretty close to release. We’ve checked out various playable versions since GDC earlier this year, and it’s really shaping up beautifully. The mechanics are super simple: Mikey can run left or right through levels, can jump over objects and onto platforms, and can slide kick through narrow passageways (think Mega Man 3 and up). That’s all there is to it.

What’s also interesting is that there are no enemies in the game. It’s just you against the clock and the levels themselves. Each level is sectioned off with multiple barriers, and collecting enough statues in each section will open the way to the next part of the level. This leads to a bit of exploration as well as careful route planning, as sometimes you’ll need to grab an out of the way statue in order to proceed, and must do it as quickly as possible if you want to earn the full 3 stars for a level.

There’s also no shortage of coins to collect in every level, and though they aren’t tied to your star rating in any way they do lead way to one of the most interesting aspects in Mikey Shorts: customization. There are well over 100 different heads, faces, and eyes that you can equip on little Mikey in order to make him your own. The pixel art in the game is so simple but has so much personality that playing dress-up with Mikey has resulted in genuine laugh out loud moments at some of the silly options available.

Mikey Shorts is way more fun than I could have expected from two newbie game developers, and I’m excited to get my hands on the final product. If you enjoy games like the aforementioned Hook Champ, Mos Speedrun ($0.99), or League of Evil 2 ($2.99) then there will be a lot for you to like here. Mikey Shorts will be a Universal app and launch for 99¢ sometime this summer. Until then you can discuss and ask the developers any questions in our forums.