When I was a kid I had a jumping-jack toy that looked like a dancing cossack. He was a little wooden man with a pull-string dangling between his legs, and when you tugged on the string his arms would move up and down, as if he were jumping, or dancing. Every Christmas he’d get pinned to the coat closet, and I’d spend way too much time making him dance to the hummed tune of the Tetris theme (I was obviously not a very politically correct child, growing up on a farm in rural Virginia).

After a minute or two of this shameful deed, I’d grow weary of simply making him dance. I’d yank at his string, causing him to wildly flail about, hyperextending his legs over his head, smacking him in the face with his own tiny fists. The bored kid that I was, this mindless savagery would continue until one of my parents yelled at me.

The small amount of joy I could wring from Gameloft’s The Amazing Spider-Man ($6.99) was found in frantically pulling his string or, in this case, webbing. Every few minutes I’d break from the tedium of whatever the game had tasked me with, and start goofing off. I’d spam webbing while simultaneously spinning in a circle, sending Spidey into a spastic, airborn contortion. Or I’d find the tallest nearby building to scale and swan dive into the pavement, somehow coming out unscathed. As this really stupid toy, The Amazing Spider-Man succeeds, and even then it’s held back by technical issues. 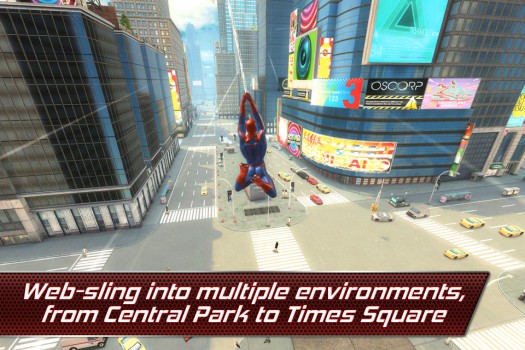 The camera rarely ends up where you want it to, so you’re stuck readjusting it with a quick swipe across the screen, which isn’t nearly as intuitive as it sounds when you’re in-flight, or in-fight. The frame-rate often drops to View-Master single digits, making the simple act of twisting and turning quite the challenge, and transforming my much-loved web-spasms into a crippled breakdance under strobelight. There’s also some pretty nasty draw-in, which actually didn’t bother me all that much by comparison, given how large the open-world city is. Well, “open-world,” in the sense that it’s large and you can travel nearly anywhere, but it’s also mostly wasted.

Largely empty and kind of dull, the city serves primarily as a jungle gym, built for tiny bits of genuine fun between chores where, as described above, it’s easy getting distracted trying to break the game. Think of it like this: you’re smashing a SuperBall against your bedroom wall just to watch it go, wondering if that small piece of rubber will break a lamp, or worse, a window. The entire time you’re also procrastinating, putting off that math homework you know has to get done. 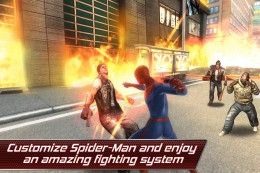 The math homework in this case are the game’s largely instanced missions. Usually assigned by NPCs, missions are delivered via the most wooden voice acting I’ve heard since early Resident Evil. Particularly offensive is your own, friendly neighborhood Spider-Man’s gee willikers delivery. Equally cheese, and just as tedious, are the mission objectives. An early example had me arriving to the scene of a fire an anarchist group had set at Oscorp. Perhaps I’d be saving pencil-necked scientists from the raging inferno? Or maybe I’d simply round up and bring the arsonists to justice? Nope. My objective was to protect a fire truck from the anarchist group, who were beating upon it with baseball bats.

Nevermind that the perimeter of the little area this challenge took place in was surrounded by other, unbothered fire trucks. I had to protect this one fire truck from the arsonists who had decided to stick around and bludgeon it to death, instead of fleeing the scene of their crime. This fire truck’s life was in my hands. So, with great power truly does come great responsibility.

Another mission was comprised of challenges that saw Spider-Man performing great physical feats to impress sometimes love interest Gwen Stacy. One of those feats included vaulting ten objects. Vaulting occurs automatically, when sprinting toward small, easily scalable obstacles. I decided I would vault cars. Unfortunately, the city is so sparsely populated that once I found a car, I figured I’d have to vault it ten times. So I chased a car down the street, vaulting back and forth across its hood as it drove on, completely unaffected by the spandex-clad teenager doing cartwheels over it. “Golly gee, I sure hope Gwen can see this from five blocks away,” I thought. 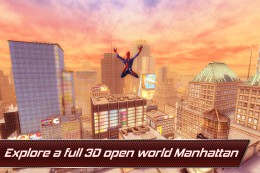 It’s this absurdity and laziness that makes both the combat and upgrade system largely meaningless. Combat is clearly inspired by the slow motion empowerment of Rocksteady’s Batman series. Webbing lets you entangle enemies, or attracts you to them like a magnet. A spider-sense button enables you to dodge attacks. Actually striking your opponent is a dull, one-button Tekken-like juggle-a-thon consisting mainly of kicks. “Spider-Man sure does kick a lot,” my girlfriend observed. Apparently. This sloppiness of play combined with the poor camera means that most battles are only as engaging as the struggle to see just what the hell is damaging you from off-screen.

It also means fights are way more difficult than they need to be. This is somewhat mitigated by the upgrade system. As you progress, you slowly level, giving you access to a variety of talents in five trees. I found the “Combat” tree most unhelpful. “Uppercut enemies into the air,” one talent reads. But why place my points there when I’ve been kicking them into the air just fine all this time? Kick, kick. When I did acquire “Combat” upgrades, they felt like largely ineffectual upgrades to an already broken combat system. My points were better spent in the “Strength and Speed,” “Body,” and “Bonuses” trees, allowing me access to talents which increased my HP, or the rate at which I gained experience.

It might sound like a cynical laundry list of complaints, but that isn’t my intention. I mean, I derived entertainment, if not enjoyment, from the game. Several times I caught myself web-slinging about the city, or trying to dive into the pond in Central Park from afar (which, by the way, does injure you), for a good deal of time before realizing, “Crap, I need to play through this thing.” But that’s not the mark of a successful superhero game. In a time when the comics Marvel and DC put out are ghoulish trash built from the remains of brilliant men like Jack Kirby, it’s fallen to these other mediums to carry the torch.

Nobody could’ve imagined it twenty or even fifteen years ago, but in 2012 if you want decent, mainstream superhero stories you turn to film, or video games. We have higher standards now. For seven bucks you could purchase a handful of objects that instill the same sense of simple, gleeful play that The Amazing Spider-Man evokes at its very best, without any of the baggage. Like a an action figure. Or a jumping-jack.