If you’re tired of having your ass handed to you in bullet hell shooters, I’m pretty sure Dragon Flight (Free) was made for you. I know it’s not hardcore to admit that bullet hell can be annoyingly hard. Well, guess what – I’m not hardcore. I like to actually play a game without dying ten thousand times in the first level, so Dragon Flight offered up some shooter fun that I could totally get behind.

The developer of this game stresses simplicity in its App Store description, and I have to admit it works. Dragon Flight is so pared down it doesn’t even have buttons. All you do to move is slide your finger left and right while your pretty princess steers her mount upward and onward. As you’d expect, waves of enemies come your way, and your job is to keep the path clear so you can advance. 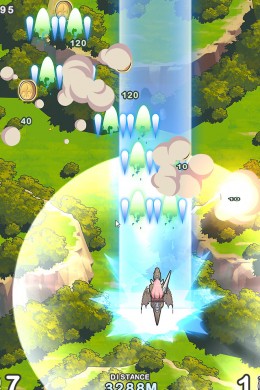 Enemies get tougher as you progress, so you’ll need to take that into consideration as you plan your journey to… wherever it is you’re going. Shooting happens automatically, which I liked, and the time spent between the title screen and actual gameplay is all of two seconds. I appreciate that, as sometimes I’m really not in the mood for a cutscene before I get into gameplay. This one nails the arcade feel through and through, and I love it.

As you proceed in Dragon Flight, the enemies that you kill will drop stuff (of course). There’s gold, which you can scramble to grab and use later in the in-game shop. This is spent on increasing your weapon strength, deluxe attacks like Power Shot, and potions that can hurl you forward allowing you to bypass enemies.

You can also use real world money in the shop to buy in-game gold so you can spend to your heart’s content, but it’s never really necessary. A few good rounds in the game will land you enough scratch to level up or buy something, so I never felt like the mini-transactions were a requirement. Enemies drop power-ups too, and those can come in really handy when the waves are coming fast and furious.

One thing I wished that Dragon Flight utilized was bosses. Maybe I’m just programmed from playing so many other shooters, but one thing that breaks up the overall feel is to come up against a bad guy that fills up the majority of your screen. It just feels good to get rid of that guy, you know? Anyway, he’s not here, and while that’s not a terrible thing I think that this game could have been even better if this element had been added. Since updates are promised in the future, maybe this is something that will eventually be added.

Dragon Flight has a great look, fun music, and best of all, it’s incredibly easy to pick up and play at any time. The game will record your distance and score each time you play, so you can track that and share it through Game Center if you like, and Facebook and Twitter interactivity are in there as well.

It might not be the most groundbreaking thing you’ll ever play, but it’s a decent entry in the iOS shooter universe. If you’re looking for a real challenge, though, you might want to read our best shmup thread on the forums, because Dragon Flight is not meant to make you suffer.