If you mash together cute cats, rainbows, toilet paper, happy music, and references to every internet meme that has ever featured any of those things, you’d pretty much get Rainbow Tissue Cat ($0.99). Since I like all of those things, I was swiftly pointed in the direction of this game by our own Jared Nelson, who clearly understands that anything even a little bit kawaii is right up my alley.

Rainbow Tissue Cat was created by iOS developer Sunny Tam, who clearly gets what makes a game fun to play. Like, I get to play a cat named Mr. Tibbles who is bouncing around on a roll of toilet paper in Meowji Castle order to swat birds’ away from the entrance. Obviously, that’s going to be awesome.

To control Tibbles, you simply tilt the phone back and forth, so there’s no buttons or other impediments to clutter up your screen. There are platforms for you to bounce on, and all you have to do is catch the birds, avoid the flying traps, and enjoy when Tibbles says things like “Meow!" and “Nya!" 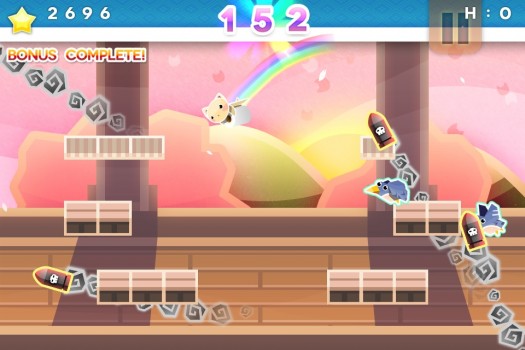 Your bounce affects your pounce big time when it comes to playing Rainbow Tissue Cat properly. Naturally, if you shoo off group of birds at a time instead of just one, you’ll earn more points. There’s also critical hits if you hit the birds hard (try flying across the screen) and bonuses for taking out enough birds in a row.

When you start the game, you’ll be playing in “Morning" mode. After you get rid of 200 birds, you’ll unlock “Afternoon,"and if you manage to take out another 200, you’ll get to “Evening." If you manage to get that far, my hat’s off to you, cause I had to play for some time before I could even get to the second mode. It’s a simple game, but it’s also challenging.

Of course, the birds drop things, or this wouldn’t be a proper arcade game. You can grab bonus items such as the hourglass, which will send you into a slowdown mode so you can avoid bullets more easily. You can also collect stars, which you can use to buy new outfits for Tibbles. I’d like to mention now that you can choose a donut, a basketball, a rocket, and a lion costume for him, which is my mind is reason enough to play this game for hours on end. 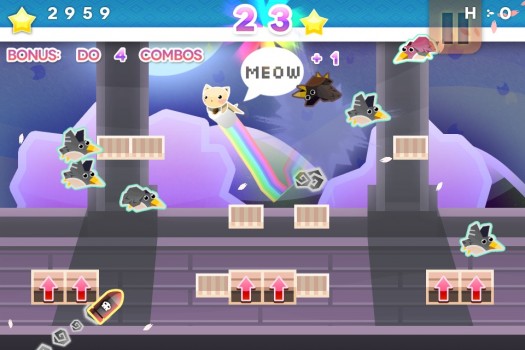 Of course, if you’re impatient and need to get the cat in a new outfit ASAP, you can just buy more stars via in-app purchase, but I appreciate that the game allows you to earn or buy these perks, making in-game transactions more of an option and less of a necessity.

With a modest but fun list of achievements (there’s even one called “Nyanemployee of the Month") and Game Center compatibility, Rainbow Tissue Cat has plenty for you to do. It’s also got that bite-sized appeal that I love. Pick it up, dance around, be a flying cat in a roll of toilet paper, and scream “NYA!" when you score well. It’s all I need from a game, really. And for the love of God, if you’ve ever enjoyed a Japanese pop song, buy it, because it’s pretty much made for you.