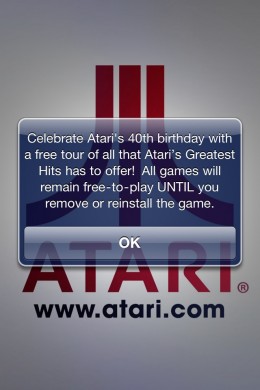 Update: Sorry, folks. Looks like the sale has ended. The moose out front should have told you.

Atari is a company that is synonymous with video games, producing some of the very first hits in arcades during the 70s and 80s and sparking off a home console movement shortly thereafter. My first console was the Atari 2600, and although many of those games don’t hold up that well today, many of them remain surprisingly good, and all are capable of tickling your nostalgia bone.

That’s really the driving force behind Atari’s Greatest Hits (Free), a collection of 100 of Atari’s games from throughout the decades that have been translated to work on iOS hardware. To celebrate Atari’s 40th(!) anniversary, the company is currently offering the entire 100 game package for free.

Well, technically the game has always been free, at least initially. You could download the shell app along with one game for free, and the rest of the catalog was available via in-app purchases. However, for the anniversary sale if you act quickly enough you can download the game and all in-app content is set to be free, and will remain that way as long as you keep the game installed on your device (i.e. this isn’t tied directly to your iTunes account like normal IAP would be, so you can’t re-download these games at a later date again for free).

But hey, that’s still quite a deal. The Atari’s Greatest Hits app itself is merely just ok from a playability perspective, I’d say. Most games have multiple control options so that there’s bound to be something that suits you, but nothing ever feels ideal. However, if you have an iCade, the app fully supports it and that would clearly be the way to go. 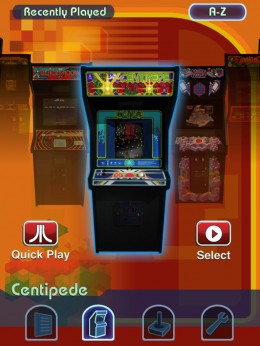 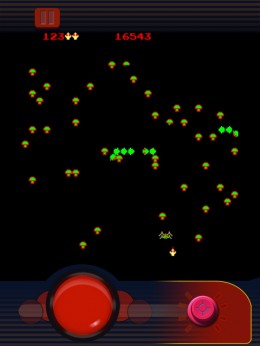 Also, the actual game library isn’t exactly going to set your pants on fire, despite the huge number of included games. There’s some gems to be sure, but a lot of the real classics from Atari’s arcade and home console heyday were 3rd party titles that aren’t included here. For the full skinny, check out our review of Atari’s Greatest Hits when it initially hit the App Store last year.

At any rate, Atari’s Greatest Hits is a thoughtfully-designed little slice of video game history that fits snugly in your pocket and, despite some playability issues and a lack of heavy hitter titles, that fact alone is worth downloading the game while the in-app content is free. Better hurry, though, as it sounds like the promotion is only running until the end of today US time. And don’t forget to keep the app installed in order to be able to keep all the free games you end up downloading from the collection.