Any child of the eighties knows the name Frank Drebin all too well. Leslie Nielsen’s portrayal of the bumbling, awkward officer oblivious to everything around him was a staple of comedy films during that time period, and I admit I haven’t thought about The Naked Gun films in well over ten years myself. Seeing a game with the same name in the App store was a pleasant surprise, though, and I was pleased about the idea of revisiting Drebin’s antics of yore (well, in the form of his son Frank Jr., anyway).

I’ve campaigned about the return of the adventure genre in the past, and developers seem to be listening, because they’re popping up all over the place these days. The Naked Gun: I.C.U.P. ($2.99) is an adventure game through and through, and from the moment you fire it up, you’ll be thinking of days spent with LucasArts classics like Grim Fandango and Day of the Tentacle. If you’ve never played either of those games, get the hell off this computer and go play them right now. 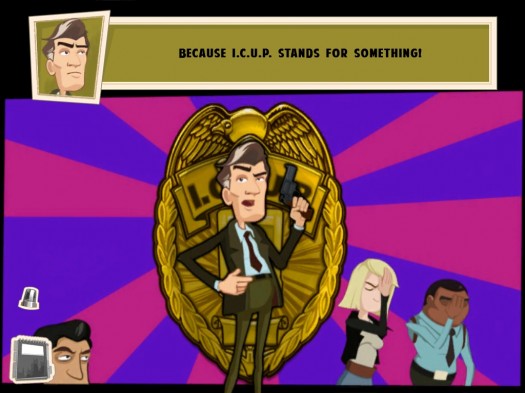 If you’re wondering if The Naked Gun: I.C.U.P. is going to be anything like the movies, it is, and it isn’t. Writer/producer Bob LoCash is behind the fully voice-acted script, and that part of the game has some of the wit and fun that the movies had, but not all of it. Then again, that would be a tall order. On the whole, the game’s got finesse when it comes to dialogue, and there are some genuine laugh-out-loud moments, but one can’t help but wonder if The Naked Gun name hurt it rather than helped it. I think if I hadn’t had such high expectations, I might have liked this game a lot more.

The first episode, Date With Destiny, has you walking Drebin around town and collecting cases to solve. It’s dressed up, but you’re mostly just object-hunting and checking out the game’s locales. I found that Drebin walked a bit too slowly for my taste, so I twiddled my thumbs getting him from place to place sometimes. As you progress, you can collect all sorts of trash-like items that can later be traded in to spruce up your apartment with new decor or buy hints from the local know-it-all. You’ll also get to practice your shooting skills later down the line as well, once you get into some of the shooting gallery events, which can be fun.

Touch controls are decent, with minimal buttons on the screen (all you have is a light which leads you to your police car, and a notepad, which is basically your menu). Getting from place to place is easy enough, and you turn the screen sideways to flip open the notepad, which is a clever touch.

It only takes a few hours to play through the first episode, but I can say that I was interested enough to check out the next one, if a bit reserved. It’s important not to dwell on what this game could be like and more on what it is, which is good in its own right. There are very few games like this on the App store, which makes it worth playing if you care even a little bit about the adventure genre. It’ll make for a nice breath of fresh air between all those physics puzzlers out there.