As much as I enjoy standard tower defense games, it’s always nice to check out a title that tries to push the genre in a new direction. Strikefleet Omega (Free) takes the core defender mechanic and combines it with real-time strategy elements and succeeds quite well in doing so. In fact, the only major issue that sullies an otherwise great title is its pushy IAP scheme.

Strikefleet plays like a hybrid of tower defense and a real-time strategy. Each mission charges you with defending your main ship from waves of ships. You’ll defend your base by warping in various other ships which either launch fighters, mine ore (which is needed to warp in shapes) or launch projectiles at the enemy. The bulk of your time will be spent micromanaging the flight paths of your ships (with easy-to-use line drawing controls) while simultaneously monitoring resources and firing shells. At the end of each mission, you’re rewarded with alloy, which can be used to purchase ship upgrades, and experience which counts toward a leveling system (reaching new levels reward you with more alloy and unlock newer ships). 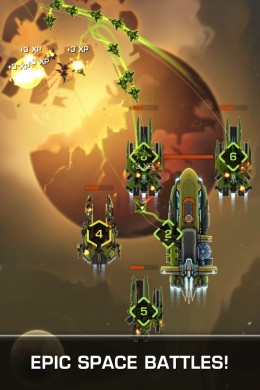 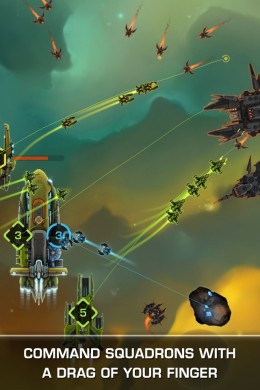 As you get further into the campaign, you encounter new enemies with more strengths and weaknesses, forcing you to make some strategic decisions on which ships you want to warp in. You also start taking on UFOs, which can only be destroyed via artillery but drop very rare megacreds (the game’s premium currency). While the campaign certainly gets tougher as you get further in, for the most part missions can get passed with enough grinding and leveling up. Of course, there’s also a survival mode which is a nice endless diversion.

I’m a huge fan of the gameplay setup that Strikefleet employs. The key to passing a mission isn’t solely based on ship selection or placement (as is the case with most tower defense games), nor is it based completely on strategic commands (like say, a standard RTS game). Rather, it’s a smooth melding of both with some reflex action thrown in. The upgrade system allows you to focus on improving certain ships while the enemy variety preserves a certain amount of equilibrium that must be respected. It’s somewhat rare for a game with so much flexibility to be balanced this well, and I’m particularly impressed with Strikefleet’s implementation.

I feel like a broken record when it comes to this issue, but the only thing holding back Strikefleet Omega is its IAP implementation. It’s not so much that you necessarily encounter paywalls in Strikefleet Omega – in fact, I found very few instances where players would feel pressured to purchase alloy or megabucks to advance. Rather, the issue I have is the simple fact that so much of the variety in gameplay is effectively blocked off without the inevitable IAP purchase.

Granted, it is theoretically possible to grind out both alloy and megacreds, but while you could conceivably collect a decent amount of alloy by replaying missions for it and experience, you only get a few chances to find a very small amount of megacreds during a mission. Considering that so many supplemental ship models require megacreds (and the fact that normal ships eventually require the rare currency to upgrade them to the max) the whole mechanic simply feels excessive. This feeling carries over with other game design decisions as well.

It’s a shame too, because I love what Strikefleet Omega has done with the ‘defense’ genre. The ability to call in your own ships and draw out flight patterns for your ships grants flexibility seldom found in traditional tower defense games. Yet, that constant threat and anticipation of waves is completely intact, creating a good spin on tower defense (ship defense?) that I hope to see more of in the future. Yes, the IAP is quite annoying, but for those of you that can stomach it, I highly suggest checking out Strikefleet Omega.