Robot & Pencils’ Spy vs. Spy remake(?) for iPad and iPhone is coming later this summer, and the offering will include online multiplayer. That’s what the latest cryptic bit of PR has made clear — after you crack the code seen below. 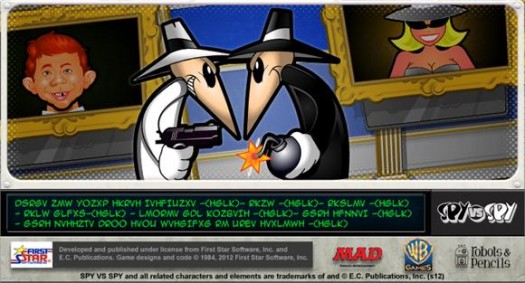 Specifically, according to Joystiq, it reads:

We still don’t know a lot about this Spy vs. Spy game, unfortunately. The original game was cool in concept. In it, you competed against another player, attempting to catch him in different kinds of booby traps spread out amongst various rooms in an embassy. Here’s hoping this one has similar play, themes, and tone.