Spy vs. Spy originated as a comic in Mad Magazine back in the ’60s, it was created into a home computer game in 1984 and subsequently ported to just about every console imaginable. And now, according to the ridiculously vague teaser image that made its way into our inbox, it appears that Spy vs. Spy is heading to the App Store. It doesn’t explicitly say as much, but the developer attached to the project, Robots & Pencils, is a known iOS developer, so it sure seems like a pretty safe bet. 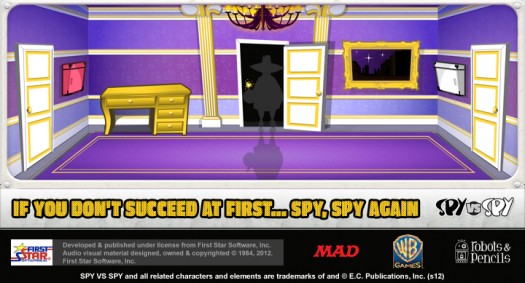 The original Spy vs. Spy game offered an interesting 2-player same-screen gaming experience that saw each player trying to catch the other in different kinds of booby traps carefully hidden amongst the various rooms of an embassy. I can definitely see this being a ton of fun on the iPad, especially with that big screen and touch controls. There is really no other information on this potential iOS Spy vs. Spy, but I’d expect that we’ll be hearing a lot more about it in the near future.