One of the many developers we met with at WWDC was Handelabra Studios. The company was also kind enough to be one of our sponsors for the TouchArcade WWDC Party.

Handelabra Studios produces a number of different titles for iOS, including one game called Uncle Slam [$1.99]. But the iOS app they’ve been focusing much of their efforts on has been an upcoming game reminder service called GAME.Minder. 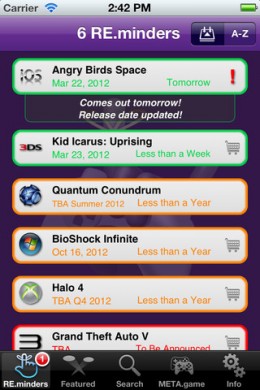 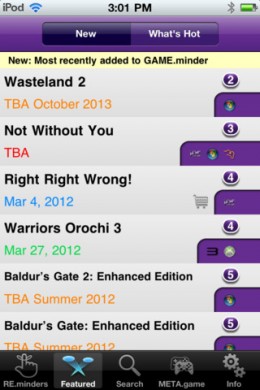 GAME.minder is a free iOS app that first launched in 2010, and is a reminder service app that will notify you of upcoming games on a variety of platforms. The service (also on web) presently supports Xbox 360, PS3, Wii, WiiU, NDS, 3DS, XBLA, PSN, PS2, PSP, PSV, Windows, Mac and iOS.

For example, upcoming PC and Console games can be added to your reminder list and you can get push notifications for changes, updates, pre-orders and releases. Content and release dates are hand curated, though they’ve also been coordinating with developers to use it as a promotional tool.

With iOS game coverage, the app does overlap some of the functionality found in our own TouchArcade App. but, of course, console/PC/Mac gaming falls well outside our area.