You’re wandering through a rural town with only a few buildings, and it’s obviously been here for a long time. There’s the weapons shop, the armory, the inn which costs you 19 gold for an evening’s stay, and a quick bath in an oversized washbasin that hasn’t seen a cleaning since last century.

A few simple flowers dot the edges of the town’s path, dots of color bobbing in your vision as you look out towards a wide open field. Smiling slimes crawl happily through the grass outside the city limits, waiting for you to stab them and gain a few paltry coins from their gelatinous bodies. Soon, you’ll save up enough gold to make your town bigger and better, and the adventurers will learn of its name.

If this all sounds eerily familiar, it could be for two reasons: You’ve already played Dragon Quest, or you’re hitting that same point with Kairosoft games that I am: complete and total oversaturation. I really tried to judge Dungeon Village ($4.99) on its quality and ease of gameplay, but let’s face it, there’s only so much city building one can do before you need to go get up and do something else. Anything else. 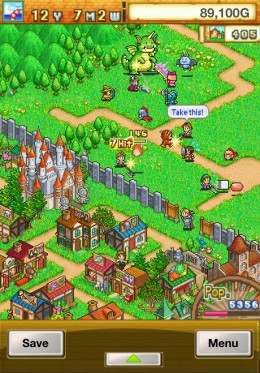 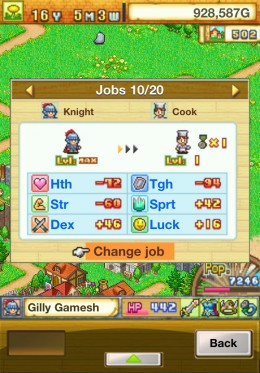 This is really not about Kairosoft’s games not being cute. Dungeon Village is really cute. Using the same management system that started with Game Dev Story ($4.99) and has continued throughout all of their titles, it challenges you to construct and maintain a thriving city that adventurers will want to come and stay in between quests (and possibly live in, if you’re lucky).

Much like the system in Epic Astro Story ($4.99), you will be able to assign a team to leave the town and go investigate the land to get their hands on treasure and gold while they fight enemies. When they find loot such as weapons and armor, you can sell it in the stores in your town, making it a more appealing place for adventurers to visit.

You wil be able to build all sorts of additions to your town while you manage these quests and hold events to boost the town’s popularity. Shops like Combat School and Magic School will be available later down the line, and you can use these to soup up your adventurers’ skill sets so they can take on bigger and better quests. As usual, Kairosoft gives nods to classic RPGs of the past with tongue-in-cheek names; your first adventurer is named “Clown Stripe." I admit it, I giggled. 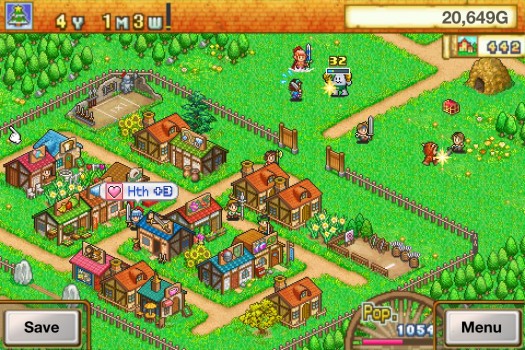 There is one new addition,which allows you to toss items into a giant cauldron and make new goodies. While it’s a nice touch, it doesn’t cloak what’s at the heart of this game, which is basically the same formula wearing yet another new mask. I noticed reading the iTunes reviews that a lot of people were foaming at the mouth for this one, so clearly, the audience is not sated yet, but I admit I’ve had enough.

That being said, Dungeon Village is still a well-made, fun game that will offer plenty of gameplay for the price. It definitely feels like their most streamlined version of their formula so far, and comes strongly recommended if you haven’t done the Kairosoft thing to death yet. But if you’ve had enough of the sim formula from Kairosoft  you may want to give it a rest, lest you end up as burned out on it as I am.