For fans of turn-based strategy, the last few years have been trying. It’s not a genre that gets a lot of love in the modern era outside remakes of classics like Final Fantasy Tactics and a handful of niche titles. Most are big, complicated things that fit poorly on mobile screens and take far too long to get to the good stuff.

But there are some developers out there working to create strategy games that are perfect fits for the small screen, developers like James Pawliuk. Pawliuk’s Tactical Warrior ($2.99) hit last year, and it’s still considered a hidden gem by many strategy fans. Now he’s released the follow-up, LostStar Tactics ($1.99), and it does its predecessor proud.

Tactical Warrior took some flak for its rather uninspiring art style, but it was otherwise an impressive game with deep tactical play. LostStar Tactics has been spruced up with a new look that reminds me of the classic isometric RPGs of the mid-90s, done up in a bright and colorful science-fiction palette. Underneath that more palatable surface is the same great foundation and a few new tricks. 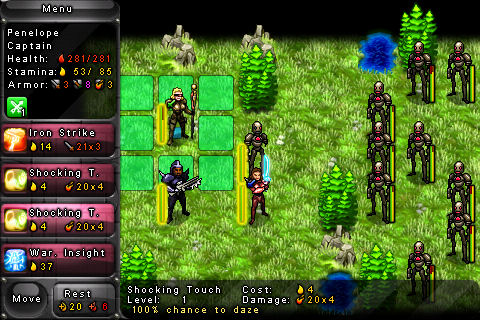 I suppose LostStar Tactics is best called an SRPG, but the focus is firmly on strategy. There’s a story of sorts, but it’s neither deep nor compelling. There are characters, but they’re pretty much faceless. There are familiar RPG elements, though, like leveling and equipment. Just don’t go expecting an engaging tale and you should be fine.

The game begins with two choices: difficulty mode and team construction. The teams are balanced to fill in for their captain’s weaknesses, stronger up front if you choose the summoner, better at range if you choose the warrior, and so on. Little about this decision matters past the first few fights, but difficulty mode is a trickier choice. Hard is really intended for experienced players, and it shows. Easy and Medium were tweaked down in the last patch; before the patch even they were a bit beyond many new players. 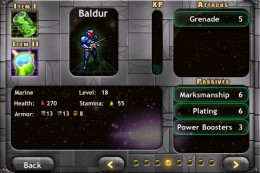 Combat is the heart of the game, and it’s both traditional and well-designed. The player takes a turn, moving a unit and using its skills, then working through the rest of the roster. The AI opponent then does the same. Every action takes stamina, which each unit pulls from its own pool. A unit may be able to move and then fight, but the skills it will be able to afford after moving may be weaker. Only the very quickest can sprint outside the edge of their movement range and still act. Resting recovers stamina, and without careful decisions on the right moments to rest you’ll quickly find all your units drained and useless.

For every type of unit but one, skills are based on class and level. Each warrior you pick up has a pre-assigned class, and each of those classes has a handful of active skills and a handful of passive skills. Whenever you finish a fight, each of the participating units are awarded experience—some for participating, some for killing and some for surviving. When they’ve earned enough to level, you’ll be given the chance to raise one of their skills by a point. 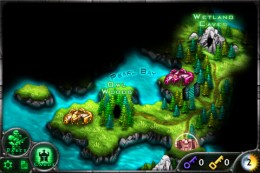 Half the battle is done before you even hit the field. Knowing the enemies you’ll face and their numbers makes all the difference. If a force is made of long-range heavy hitters, sending in a group of slow-moving melee fighters is probably suicide. On the other hand, if you have only ranged units fighting an overwhelming force of melee fighters you’ll find their dead zones penetrated in short order. The right mix is key, and we’ve only covered the basics. Resistances, strengths and armor ratings are LostStar Tactics 102.

It doesn’t take long to expand your team well beyond its original three units. Each combat location on the game’s map includes a list of skirmishes sorted by difficulty, and each lists its reward: an item, a card, a key or a warrior. Other than the keys (and I’ll get to them), you’ll be given a list of three rewards to choose from. Some fights can be repeated, so if you really want to build up a maxed out team early on the option is there. A word of warning though: each fight has a limit to how many warriors you can bring in, and those that don’t participate don’t earn experience. A big team might mean a lot of grinding. 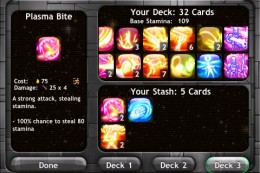 Keys are problematic in a way that little else in this game is. You might not realize it while you’re messing about in the first couple caves, but time is passing. You need keys to progress, but keys are usually rewarded for extra-challenging fights. Not knowing better, you’ll probably take your time to get to those. Bad call. Some encounters are on timers that start from the moment the campaign begins, and you’ll find yourself locked out of optional areas if you take too long. This would be an interesting element of long-term strategy if it were explained clearly, but it’s not.

The last reward I mentioned, cards, are for one special unit: your captain. Where every other class has pre-set abilities, the captain has a deck of cards, and each card is an ability. You can build up to three decks with the cards you earn, say, focusing on support abilities on one, range on another. This makes your captain not only extremely versatile, but also uniquely your own. There’s a stamina bonus for including more cards, but this comes at a cost: potentially drawing a selection of cards you can’t use at all. Resting without acting requires you discard a card, something that can be a pain when you’ve drawn a good hand or a lifesaver when you have nothing for the situation at hand.

You could choose to run into battle without ever taking your captain if you want an experience closer to Tactical Warrior, by the way, but you’d miss out on a lot of the fun. 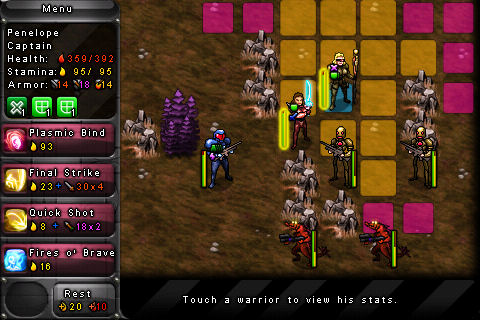 Like its predecessor, LostStar Tactics has its flaws. Many of the smaller details of combat are glossed over; you may only come to understand them while pawing through the tiny text that’s found just about everywhere. There’s no Game Center support to speak of, and the interface can be confusing. Those are all small things, though. The biggest issue I’ve run into is that the fights start to feel a bit samey at times, when a slight change to the map layout is all that seems to change between scenarios.

Flaws aside, LostStar Tactics is one of a too-small list of games strategy lovers really ought to have on their devices. It isn’t perfect, but it improves on Tactical Warrior in ways that should make it accessible to a much larger audience. Among the wider competition, it stands out for being designed for mobile, with quick play sessions and touch screen interfaces as a basis to build from. LostStar Tactics could use a bit more personality to really stand out, but don’t let that stop you from enjoying this solid strategy game. Check it out, and share your thoughts in our discussion thread.