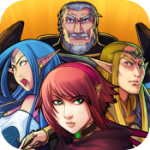 Back in 2009, we saw the beginnings genre-defining game series. Look at Angry Birds—not the first of its kind, but the game that launched a thousand clones. Defender Chronicles ($1.99) felt like one of those really important games. Yeah, it was tower defense, but it was a huge, sprawling vertical tower defense game, and that felt like something special. So it’s kind of strange to be here in 2012 with few similar games to look at, and a sequel that hasn’t had to outdo years of design iteration.

Not that this is strictly a negative. If there’s one area where Defender Chronicles II: Heroes of Athelia ($1.99) shines the most, it’s at being a faithful followup. It’s shiny, new and improved, but its skeleton is the same vertical tower defense title we fell in love with in 2009. Whether you’re coming at it fresh or looking for a blast from the past, it’s hard not to fall for it fresh—or all over again. 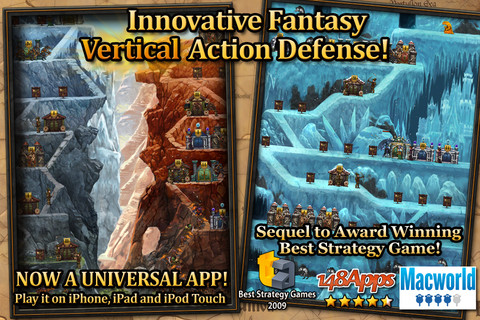 We took a long look at how the sequel compares to the original in our preview, but let’s assume that you’re not already hyped for this game. If you’re into tower defense titles, you’re really going to want to give Defender Chronicles II a shot. The cool thing about vertical tower defense is how much every decision you make affects every other decision. Since there are layers of defenses stacked on top of each other, ranged units are extra valuable when positioned carefully. But enemies will walk right past them, so melee units are also vital. Each unit type fills a vital part in the game’s strategy, so deciding which static position will make the best deployment is of the utmost importance.

That’s the best part. The worst is the game’s over-reliance on imperial tokens. These babies buy everything – new heroes, new abilities, items, the works. You’ll even need to spend a big chunk of them if you want to unlock 4x play speed over the usual 2x max. Getting them can be a pain. If you’re good and you’re on a second or third playthrough, you can earn them pretty quickly on the highest difficulty modes. Or you can earn them at double speed in freestyle mode. On the other hand, if you’re slogging through the lower difficulty tiers and not making much progress, you can always open things up a bit by buying an IAP pack or watching an ad in exchange for your daily disbursement of free tokens. It’s not a paywall, but it’s sure not ideal. 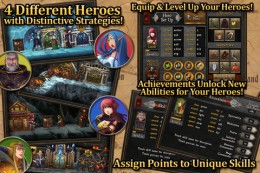 But here’s the thing about tokens—they work out perfectly if you consider the length of time you can put into this game. There are ten levels, each with five difficulty modes to work through. And it’s not like those modes range from baby’s first tower defense to reasonably challenging. Novice should be pretty easy for most players, but all bets are off for anything beyond that—even Casual feels like anything but. If you want to max out your performance, you’ll have a long climb ahead of you.

Once you work your way through the game with Melwen, the elven mage you start the game with, you can replay the whole thing with another hero, the General. He comes with a different set of abilities and a whole new set of stats to level and items to equip. Once you’ve burned through both of them, you can pay a rather steep price in tokens to unlock two more heroes to start fresh with. All of that, and we haven’t even left the campaign mode. Once you work your way through the story (attractively told through comic-book cutscenes) of each level, you can try it again on any of the five difficulty modes with the randomized waves of Freestyle, or the endless onslaught of Extended mode.

When you throw in the Classic modes, which give you the pure, competitive experience of an even, artifact-free playing field, we’re looking at something north of 50 full playthroughs of each level to complete every smidgen of content Defender Chronicles II has to offer. Obviously most people aren’t going to work through the vast majority of that, but if you want to earn tokens and get your money’s worth, there is absolutely no shortage of opportunities. That’s not the only test your dedication will face—you’ll also be looking at levels that have upwards of 100 waves of enemies, where one slip-up means the difference between earning a rating that could best be described as decent and earning top marks with the maximum number of stars.

If you’re looking for a game to seriously sink your teeth into, Defender Chronicles II is a great choice. It has a ludicrous number of challenges to work through, with a list of loot that approaches Diablo-levels of variety and four heroes to level and equip. It’s an ambitious volume of rather entertaining content. Me, I lack the dedication to play through each level a dozen times or more, but the option is there, and the rewards are significant. And all of that is before we even consider nearly 100 Game Center achievements and over a dozen leaderboards. Athelia is quite the proving ground if you’re looking to test your mettle in tower defense strategy.

It might have been better if the vertical tower defense genre had seen a bit more growth in the past few years. In some ways Defender Chronicles II feels like a throwback, and leaning on IAP isn’t the best way to make it feel more modern. But this sequel takes what was already an excellent game and cleans it up in all the ways that count. The sound and music are still excellent, the visuals are better than ever. It’s the perfect starting point if you’re looking to get into the series, and it’s a great place to pick up if you’ve already put in a few hours with these heroes. On that score, it’s hard to see the wait as anything less than completely worthwhile. If you’re interested in learning just how much depth there is to the game and seeing hints of the content to come, check out our discussion thread. Just be prepared to dig in for a while.