When you truly adore a game, sequels can be a scary thing. Sure, it’s more of what you love—but what if they mess it up? What if they abandon all the things you love for the sake of novelty? Well, Defender Chronicles ($1.99) fans, let us put your fears to rest. We’ve had a chance to spend some time with Defender Chronicles II, and it seems to have everything the original had to offer. And every little bit of it is bigger, better, and sexier. 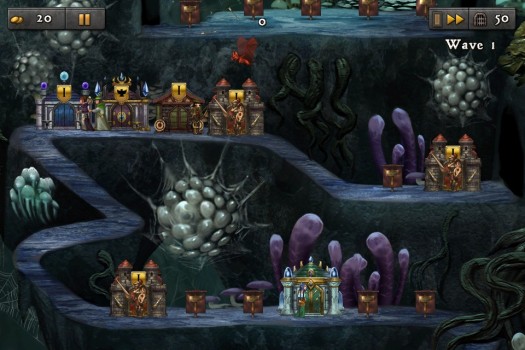 I spent the summer of 2009 consumed by the original. I had a brand new 3GS and pages of games, but Defender Chronicles – Legend of the Desert King was the one that devoured my time. Its mix of vertical tower defense and RPG conventions was completely irrestistable, and Gimka Entertainment and Menara Games propped it up with massive updates that added to its already substantial content. Defender Chronicles II is looking like it will contain that same potential for time investment, so you might want to clear your schedule in advance.

This game is leagues beyond its predecessor in terms of visual appeal, and that’s an achievement—as we pointed out way back in our review, Defender Chronicles was a looker in its time. But now every unit is more detailed and every animation is more fluid. And crisp—Retina support is in for iPhone, though apparently not for iPad. The game lives up to the rose-colored vision you may have of the original, but it’s much more refined, more up-to-date. 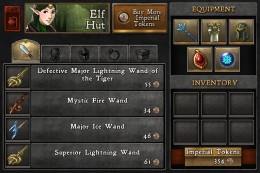 The gameplay has been similarly preserved. You’ll still spend your time turning flags into guilds and upgrading them through tiers of units, archers to rangers, squires to cavaliers. Strategy seems more important than ever before, with enemy units that take advantage of every potential weakness in your defense. Height and range are the biggest considerations as you scroll around massive, multi-tiered 2D maps. There are quite a few of those this time around, and they hit an almost Escher-esque level of complexity pretty quickly.

There isn’t much that’s changed outright, really. Voice actor George Ledoux returns to impress us with his Sean Connery impression, though he also pulls off an impressive lizardman. Heroes Melwen and the General return, but this time they’re accompanied by two new friends: Lovell and Elwyn, an archer and priest. The brand-new story of the heroes and their defence of Athelia against the Orcs and Forsaken is told through gorgeous comic-book cutscenes once more.

From our brief time with the game, it really seems like you’re going to be able to put in a ludicrous numbers of hours. There’s so much here for the player that wants to go deep, with heroes to level up and customize, hundreds of artifacts to locate and five difficulty levels and game modes to work through. The difficulty curve also feels a bit steeper, so if you’re already familiar with the game you shouldn’t be underwhelmed. If you’re feeling particularly cocky, you’ll be able to challenge yourself with a huge list of Game Center achievements and leaderboards.

Ultimately, it seems like Defender Chronicles II will be the perfect sort of sequel. It updates already excellent gameplay for a new generation of devices, and brings in all sorts of improvements in the process. It’s hard to imagine any Defender Chronicles fans being disappointed, and folks that are new to the series should be in for a treat. We’ll be taking a closer look at the game over the next couple weeks, and we’ll be back with our review after it hits the App Store on May 24th. In the meantime, the developers are posting regular previews in our discussion thread, so take a peek if your appetite isn’t already whetted enough.