Late last week The New York Times published an op-ed debate titled, “Hip, or About to Break a Hip,” a discussion about whether 45 year-old skaters are “embarrassing and risky or inspiring and life-affirming?” Opinions ranged from “inspiring and life-affirming,” to “… do something productive: become an ultimate fighter, get your G.E.D., date an 18-year old.” Um, wow, guys.

Appropriate then is the release of Brisbane-based IV Motion’s Penny Time ($0.99), which flies in the face of that rather unnecessary conversation. Shorn of the skating genre’s mechanical trappings, the game is allowed to focus on the sport’s anarchistic roots. Its reply, “Who gives a #$%*?”

Penny Time announces its care-free absurdity with a series of vignettes that see the player character using a Penny skateboard, crashed like a meteorite from the heavens, to freeze time and subsequently summon some spirit animals in the form of a pig, dodo and porpoise. Right. So, the player is off on his or her quest to skate through a series of time-frozen environments with the aid of the aforementioned Ghost Dodo. 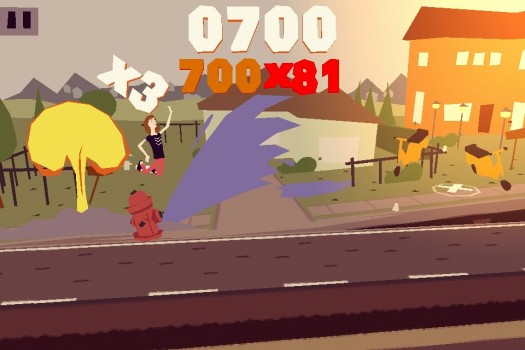 Play is similar to rhythm runners like Tomena Sanner ($1.99) and Bit.Trip Runner. The player proceeds left to right, clearing obstacles by swiping when rolling over a series of white (up), blue (left) and yellow (down) targets. Levels consist of three sections: a standard area where one acquires points based on timing of swipes, a multiplier section, and then a “cash-in” portion where the player is given the opportunity to bank their multiplied points, or take them on into the next area and risk bailing and losing the combo.

Touch controls are a little dodgy. There are a handful of times each run where I go flipping over a guardrail or a child or something because the game’s missed my inputs. This is sometimes exacerbated not only by how unforgiving the game can be (I’ve often hit my trick on the periphery of a target only to tumble into a sad pile), but by the minimalism of the flat, untextured 3D models. It borders on gorgeous abstraction in the vein of a Katamari Damacy, but the environments are so busy it’s often difficult to tell exactly what’s ahead. Case in point, during a particularly funny intro I held the iPhone up for my girlfriend, sitting behind me on the couch, who responded, “I can’t see… it just looks like a bunch of shapes.” Indeed.

That in mind, I’m not sure that it’s going to have much of a following among the leaderboard junkies. But, in addition to Game Center leaderboards, the game has a bevy of character and board customization options, along with the requisite Facebook and Twitter support, 84 achievements and a fantastic OST.

A rhythm game lives or dies by the quality of its tunes, and electronic artist and fellow Brisbanite Hunz has crafted a score among the best on the platform. A warm, varied slice of electronica, it’s up there with the Groove Coaster ($2.99) and Beat Sneak Bandit ($2.99) soundtracks, well worth the dollar the game costs. It’s a trump card that staves off mediocrity in what is otherwise an “okay” game, an intelligent pairing that propelled me along on my quest to count the black cats littering the next area. Note: this game has its share of black cats.

With a smart few stylistic choices, IV Motion have made a fine if sometimes frustrating little game, worth the low price of entry. Like the skateboard brand it advertises, it is “designed and built to look good, perform well, and exceed your expectations.” A little rougher around the edges maybe, but a ridiculous, ageless thing that can be enjoyed by anyone. And that’s okay.