Taito’s Groove Coaster [99¢] is an experiential music and rhythm game that mixes fun, upbeat, and jazzy tracks with a psychedelic and retro-informed visual aesthetic. At its truly mechanical core, it’s just a tap game that has you drum on your iPad whenever a bubble crops up on a neon rail, sorta like a one-note Rock Band. While that’s not necessarily entertaining in the year 2011, Groove Coaster’s constituent parts manage to overpower its simplicity, making for a game that’s a pleasure to pick up and thrum alongside, lack of depth and flaws be darned.

It’s easy to be wooed by Groove Coaster’s striking vector graphics presentation in the same way that it was hard to look beyond another Taito title’s visuals in Space Invaders: Infinity Gene [$4.99]. But even without the trains of retro baggage behind Groove Coaster, it manages to feel aged, yet refined and re-imagined in the same way. It’s a unique approach that really adds a certain flavor to the action and adds to the experiential edge of the project.

The thick wire-frame rail guiding all the action, by the way, isn’t static: it zigs, it zags, it ducks, and it circles alongside a given music track’s ebb and flow. Your cursor, which can be an assortment of objects including Taito-branded characters, helplessly runs along these tracks, speeding up and slowing down with the beat as thematic particle effects, ranging from flowery explosions to plain ol’ particle-vomit, crop up all over the place. Groove Coaster is a music game, sure, but it’s also a visual treat in addition to an audio one. 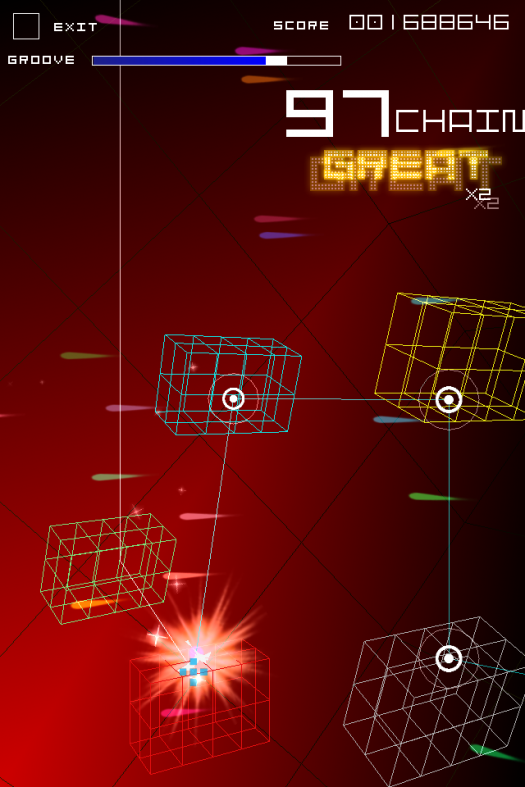 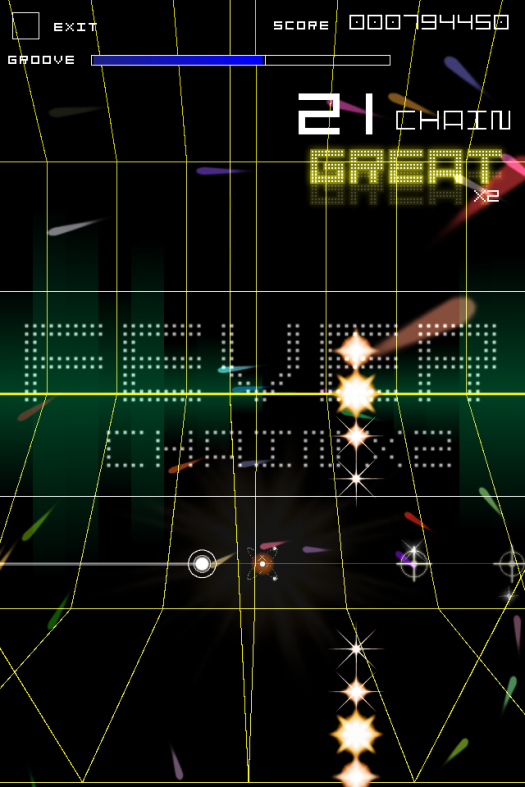 In this vein, the backgrounds and their respective effects are cool, too, especially as they morph and throb thematically as songs change tempo.

It’s not all great — there’s an exceptionally fundamental flaw nestled within the visual design. Sometimes, instead of ratcheting up the intensity of a song and the beats you need to hit, Groove Coaster uses its presentation to conceal your cursor and thus hamper your ability to hit the glowing “beat” orbs. This comes off as a tactic to obscure its fairly rudimentary play, and a needless one at that. So, what? This game is easy to play. Who cares?

I’m not sure how to classify the music used in the game. There’s a mix of J-Pop, new wave, house, and other fast-paced highly electronic stuff. Most of it, actually, appears to be pulled from other Taito titles, but they all seem to fit with the visual stylings. In particular, Arkanoid DS’ “Happy Smiling – More Happy Mix” sticks out in my head as on of the best songs, as its thematic qualities and the music line up pretty well.

Most songs introduce some neat visual elements and mechanics to the fold. “Happy Smiling,” for example, is the first level to add a merry-go-round of beats that swirls and rotates as you hit (or miss) each one. As you move up in difficulty, new “beats” are added that make you do things like swipe and flick, or even hold and jiggle your finger. All of the songs seem to have a new mechanic, which makes for some compelling replay opportunities.

Oddly, but somehow fittingly, Groove Coaster features a fairly advanced “perks” system. As you beat levels in the game, you increase your own experience level. As you do, you unlock new avatars and upgrades that net you bigger bonuses or special in-game perks. It’s a pretty standard carrot-on-the-stick approach, but it’s effective. Additionally, you can purchase IAP items and avatars that do the same things these bonuses do, except they really push it to the max. I’ll stress that the IAP options feel entirely, well, optional.

Groove Coaster is a good game with a fundamental flaw. It also has a few nit-picky problems, too, like it’s spectacularly abrupt ending and horrible “How To,” but the strength of its presentation, music, and RPG-lite systems make up for anything that could sour the experience. I’m generally not too into music games, and for what it’s worth, I’m suggesting this one to whoever will listen. It’s fun, it’s sharp, and it’s an experience.