Dragons Odyssey Frane ($5.99) has the distinction of being the only game that makes me want to reach out and pinch its metaphorical cheek. Not only is it kinda adorable, it’s also all sorts of loveable. Like the fawning, mud-encrusted niece that is never short of questions about unicorns, Exe-Create‘s port of their PC-based action-RPG title has a way of making you tilt your head and go “D’awww".

Actually, before we get any further, the whole ‘action-RPG’ bit needs to be clarified a bit. Those expecting an assembly of eccentric party members, a varied set of skills to manage and all of the other traditional tropes may be a touch disappointed. Dragons Odyssey Frane doesn’t actually have all that, per se. In some ways, the game bears more of a resemblance to a laid-back shoot ’em up than anything else.

The protagonist, a tussled-haired boy by the name of Kunah, is in charge of all the melee stuff. With every tap of a button, he either swings a yoyo, flails with a dagger or beats on things with an element-driven punch. Those with a preference for ranged attack will have to rely on his loud female companion Riel. She’s the one who inunduates enemies with glowing projectiles every time you hit yet another button. 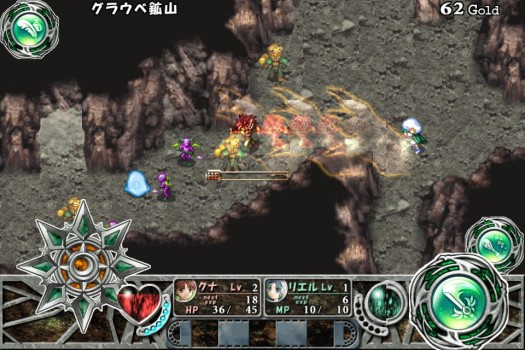 What’s interesting about all this is the fact that hitting the melee button will cause Kunah to lock onto targets within the screen, thereafter allowing Riel’s attacks with greater ease. Riel, while a separate character that can go into ‘Rage’ mood (when she loses it, she will, quite literally, bounce Kunah across the screen and clear it of enemies that way) if you permit her to be smacked around too many times, neither has a health bar nor real equipment slots of her own. The only customization you’re allowed with her (from what I’ve seen, at any rate) is the ability to change her attack.

Combat follows a similar theme. While there are a fair number of enemies that will just barrel dumbly into you, others will, well, shoot relatively blindly at you. The bosses have slightly more variety. From a trio of sisters to a monstrous, mirage-inducing sand worm, they’ll have you ducking away, chasing weak spots, dodging projectiles and flinging attacks of your own. 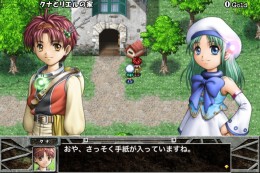 Of course, this isn’t necessarily a bad thing. Dragons Odyssey Frane is considerably more story-driven than most of its brethren in the App Store. The gist of the tale is this: you play as a responsible, mildly perverted boy called Kunah. When his angelic mentor Escude goes missing, he and his friend Riel (both of whom are actually dragons) gain permission from God (Yes, with the capital G and beard and all) to go look for her. Once accorded that sacred duty, they descend onto the mortal plane and begin their quest. Pedestrian as it all sounds, it’s actually rather amusing.

For one, Kunah and Riel actually act their age. More often than not, they stumble and they stammer and they speak out of turn. Many of the denizens of the game treat them the way anyone would treat a precocious child. The God portrayed here is also far from dignified. In one memorable instance, he actually disguises himself as a rather… conspicuous piece of wooden furniture in an attempt to surprise our protagonists. 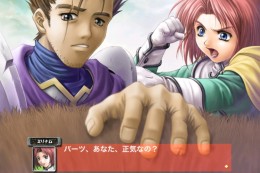 Unapologetically goofy, Dragons Odyssey Frane is filled with silliness. There are star-crossed feline lovers, a military man with a retinue of giant hamster-like things, and familiar stereotypes played to perfection. For those in search of a serious plot line, Dragons Odyssey Frane will not be your game. For those willing to accommodate its many eccentricities, though, this charming piece has a lot to offer.

Aside from the main storyline (things generally follow the usual ‘get quest, investigate dungeon, defeat big boss’ format), you’ll also be able to engage in more domestic duties. Unlike most RPG protagonists, our dynamic duo are not homeless itinerants. In the beginning, Kunah will actually build the two of them a rather cozy-looking abode and it is within the confines of their home that you will be able to tinker about in a makeshift workshop and mess about a kitchen.

While not particularly deep (it generally consists of combining two items together), the crafting system is oddly satisfying. I have a nagging suspicion that there’s no wrong way to do things here. If bread and rice can produce ‘bread sushi’ as opposed to a virtual eye-roll from the game, anything is possible.

(A nifty detail: people will slowly assemble a village around your heroes’ residence as time passes by. Eventually, you’ll be able to purchase rare equipment, plant vegetables and take part in a few random quests.)

While hardly cutting-edge, the visuals in Dragons Odyssey Frane are rather endearing. I’m not the biggest fan of their character portraits but the sprite work and the tiny, animated details (the game features one of the most attractive d-pads I’ve ever seen) are all things I can get behind. Unfortunately, the same cannot be said about the grating, cringe-inducing voice acting. By the end of the first spoken line, I had turned it off in mortification.

Aside from those small issues though, Dragons Odyssey Frane is rather hard to dislike. The characters and the world will slowly grow on you. Combat is brief and brutal, yet satisfying. Personally, I haven’t tried courting any of the characters just yet (it looks like it’s possible but I couldn’t bring myself to even ponder the idea given how young the protagonists look) but the option is present for those interested in such things. If you’re willing to put up with occasional stereotypes, loads of silliness and the relatively high price tag, I can’t recommend it enough for a weekend change of pace.