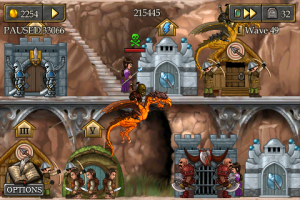 The tower defense genre has arguably seen a good deal of growth and evolution with many significant new releases this year. Defender Chronicles: Legend of the Desert King [$2.99] is one of the latest, and delivers a solid fixed-path TD game with RPG elements offering gamers a new twist. Whether or not you’re into the fantasy medieval theme, the gameplay itself provides enough challenge and depth that you may want to check it out.

Defender Chronicles is one of the more visually beautiful games you will see. From the 5 beautifully drawn maps to the equally detailed defenders and enemies, the details and effort from the developer is obvious so you won’t be short on eye candy. One unique aspect is the 2D side view in which the game is played. Think of it an elaborate staircase viewed from the side. 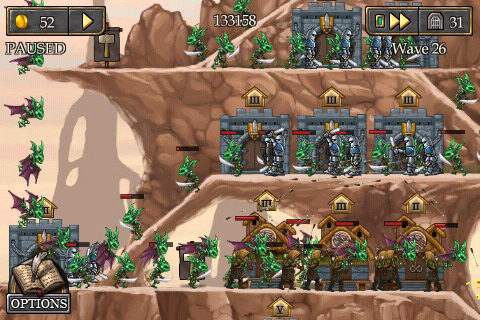 The 2D view itself provides a different dimension to the genre. The game definitely involves quick thinking and understanding the enemy because the attack waves can be intense and rapid. In many cases, you will want to think through where specific defenders are placed based on the type of enemy which will attack by land and air. Also, plan ahead because when as a defender is upgraded, he is also temporarily unavailable. And if your defender is overrun, he won’t appear at his post for a period of time which obviously can be bad.

With an epic soundtrack conveying the medieval theme, each quest is briefly introduced with voiceovers and text which is well presented and shows the polish of the game. The text may be difficult to read for some, but the accented voiceovers help that a bit. The voiceovers can be overdone (you can turn them off), and even as you upgrade or rejuvenate defenders, accompanying voiceovers will shout battle cries. 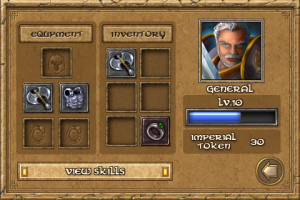 The objective is to defend the General Headquarters by destroying enemies which in turn earn gold. The gold can then be used to upgrade defenders, and in the case of Defender Chronicles, victories that can be applied to RPG elements. An optional tutorial is presented in the first quest, but to a certain degree I wish an overview of the different enemies and bosses were also included for reference.

As the Hero, you command 6 types of defenders—warrior, archer, berserker, ranger, halfling, and mage—each with its own unique abilities and upgradeables. Your defenders will battle a variety of enemies from Gnoll Captains, Orc Chieftains, and Queen Goblins to the fearsome Wyrm Rider Duo, Awe Inspiring Giant Golems and Meat Chomping Slimeballs.

The RPG elements add to the overall gameplay and the replayability. The Hero can be upgraded in terms of skills, powers and defenses. This comes of in the form of skill points and stars earned. Depending on the level of difficulty and the success you have, you earn stars and points that can be used to upgrade your hero and unlock new quests, artifacts, and features. You will find yourself playing levels over just to earn more items to take into the subsequent battles. 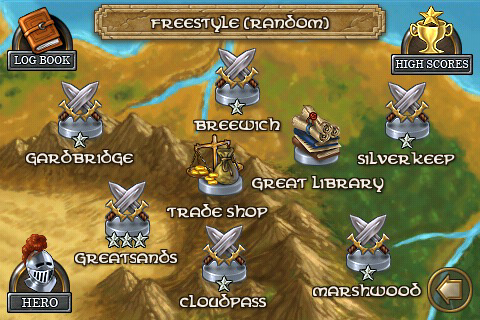 The game offers 5 standard maps/levels—Great Sands, CloudPass, Marshwood, Breewich, Silver Keep— which represent battles against the evil Orc Hordes and the rising Undead, and can be played in any of 4 difficulty settings: casual, veteran, master, heroic. In addition, there are 5 game modes – campaign, freestyle, extended, classic and classic extended. A coming 1.2 update will add an additional map with more planned on the way.

You earn stars as you progress which opens the door to two additional resources — the Trade Shop and Great Library. With Trade Shop, items such as armor, swords, magical rings, and other equipment can be acquired to upgrade your hero. You can also spend stars in the Great Library, which unlocks 8 secrets including an extra map, music and two additional defenders. Note that a few users seem to have had issues with crashing but a submitted 1.1 update is said to have corrected this issue. Apart from this, the game has been very well received in our forums.

Defender Chronicles is a fixed path TD with specific build spots for placing defenses. Fixed path vs. non-fixed path comes down to preference for many, but frankly, each offers enough differences in gameplay that I think you shortchange yourself by focusing on one over the other. Defender Chronicles combines a solid TD game with RPG elements all wrapped up in a polished presentation. While the tutorial could use additional work to explain certain elements, the game itself presents enough variety in terms of upgrades, unlockables and replayability that make Defender Chronicles a standout in the genre.

Chillingo and a dozen other companies are presently sponsors of this site, but that does not affect our choice of coverage or influence our reviews.