Season finales are undeniably difficult to pull off: they need to pull the disparate plots of the story together in a way that feels satisfying but not hackneyed, while still maintaining a sense of self-contained narrative. A serialized game like Sam & Max Beyond Time and Space carries the added weight of presenting us with the highest expression of the puzzles and mechanics its introduced thus far.

I’ve come to realize that the second half of Sam & Max Beyond Time and Space — say, starting with “Night of the Raving Dead," [$4.99] and continuing through the finale, “What’s New Beelzebub?" [$4.99] — are funnier and generally better than the first two episodes. This is largely because the last three episodes are more tightly connected, with each cliffhanger transitioning smoothly into the next episode. They feel cohesive, and that makes me feel invested.

But it’s also because, in contrast to the procedural feel of the first two entries in the series “Ice Station Santa" and “Moai Better Blues," these latter episodes are a perfect fit for the point-and-click adventure genre. 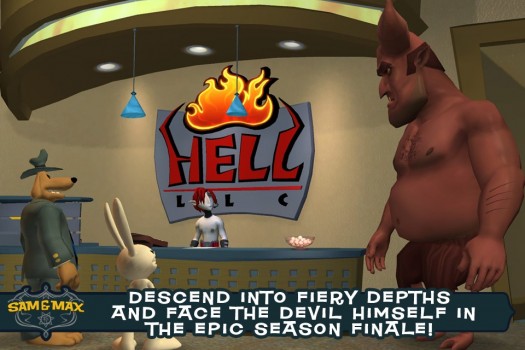 “Beelzebub"‘s only narrative blunder comes during the series’ antagonists’ big reveal, which is funny enough on its own, but is probably much better if you’ve played Sam & Max Save the World as well. (This is a recurring problem for Beyond Time and Space as a whole, especially since Save the World isn’t available on the App Store.) Every thing else in “Beelzebub"  — every piece of dialogue, every joke, every plot twist, every fan-service callback — feels earned, not only because it has the rest of the series supporting it, but also because the audience has had to work for it.

Steve Purcell’s writing doesn’t waste time with exposition or lengthy explanations, and players who haven’t been paying attention since “Ice Station Santa" probably won’t make sense of each villain’s plans or of the haphazard and absurd sequence of events that lead up to “Beelzebub." The jokes, the dialogue, and even the over-arching plot of the series come tumbling out, rapid-fire, and only the quick-witted and observant will get much out of it. Beyond Time and Space hedges its bets, of course: even if you miss something ostensibly important, the games are light-hearted and silly enough to keep moving forward. Nevertheless, Sam & Max hews to point-and-click mechanics that prize attentiveness and lateral thinking, and “Beelzebub," more than any other episode in the series provides a narrative structure and presentation to match. 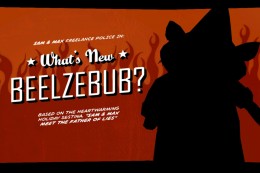 Beyond Time and Space is at its best deconstructing horror tropes and, while I liked the time travel puzzles from “Chariots of the Dogs [$4.99]," “Beelzebub" and “Raving Dead" have the best settings and ambiance. The finale tasks the Freelance Police with scrambling between the well-worn block near their office, caught in the middle of the apocalypse, and a snarky, tongue-in-cheek version of Fortune 500 Hell. It’s clever and atmospheric, and it drives the games most interesting puzzles, which involve attempting to disrupt Hell’s operations long enough to free some damned souls.

“Beelzebub"‘s narrative hook literalizes an abstract idea like the afterlife and reduces it to another explorable screen to interact with. In other words, there’s no difference between Hell and the “real" world for Sam and Max, in the same way that there’s no difference between 1967 and 2008, or between being alive and being a zombie. It’s right there in the title: Beyond Time and Space. Without intellectualizing too much, that’s a pretty sophisticated concept, but Sam & Max is charming and self-aware enough to keep it in check. Purcell doesn’t let metaphysics get in the way of Max’ fart humor, and the result is a series that allows for outlandish puzzles and silly in-game logic without sacrificing pithy dialogue or character interaction. It’s also why, for example, one of “Beelzebub"‘s puzzles can call for the death of Jimmy Two-Teeth’s entire family, and no one really has to feel bad about it.

There’s a lot to admire about the way “Beelzebub" illuminates and caps off the various narrative and thematic threads running through a five-game series, but its puzzles generally lack punch, an unfortunate side-effect of following the preternaturally clever “Chariots of the Dogs." Over the course of Beyond Time and Space, the best puzzles have challenged our perception of the game world, mutating and iterating on inventory-based puzzle design with portals, zombies, and time travel. “Beelzebub" has a few standout puzzles, including a fourth-wall-breaking language trick, but is generally less ambitious in its design than previous titles. 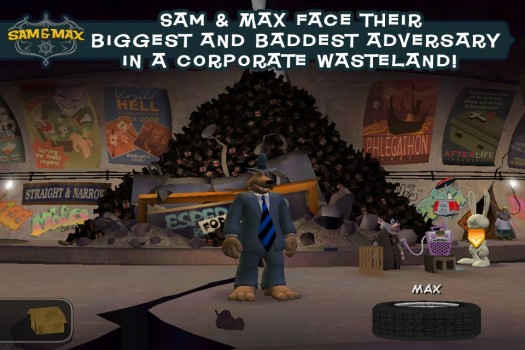 Telltale is, as a rule, well-versed in designing accessible, intuitive puzzle games and “Beelzebub" is generally no exception, despite featuring a few textbook examples of adventure game pratfalls: guess-what-the-developer-is-thinking crops up once or twice, as do scenarios that require thorough, exhaustive clicking and hunting instead of puzzle-solving. “Beelzebub"‘s occasional clunkiness is somewhat mitigated by a retroactive appreciation of the funny in-game logic, but that’s to substitute for the thrill that accompanies solving Sam & Max‘ best puzzles.

While “Beelzebub" lacks the unified theme of “Chariots of the Dogs," it’s no slouch. A few missteps aside, the puzzles — while of the traditional match-this-item-with-this-NPC sort — are clever and well-realized, even if they tend to be a little on the nose. It’s still one of the best in the series, funnier than “Moai Better Blues" and with clearer puzzle design than “Raving Dead." If you haven’t played any of Sam & Max Beyond Time and Space, now’s a good time to start: “What’s New Beelzebub" is a fine capstone to a great series.