Does the idea of yet another farming game sound exciting to you whatsoever? Your answer would likely be a resounding no, unless you’ve seen that there are still plenty of seeds to plant with Tractor Trails (Free), the farming game that is not only fun and exciting but plays more like a puzzle game rather than the next FarmVille (Free) clone.

You see, Red is a tractor that needs to plant seeds on his maze-like farm so he can grow fruit trees. Your (and Red’s) goal is to earn a three star rating at the end of the level by planting as many trees as possible (filling the entire board if you can), collecting the groundhog, and doing it all in the fastest amount of time you can. Earning stars allows you to unlock more level sets, with five in all. Controlling Red is incredibly easy, only requiring that you swipe where he needs to go on the farm so he can plant trees and collect the groundhog along the way. 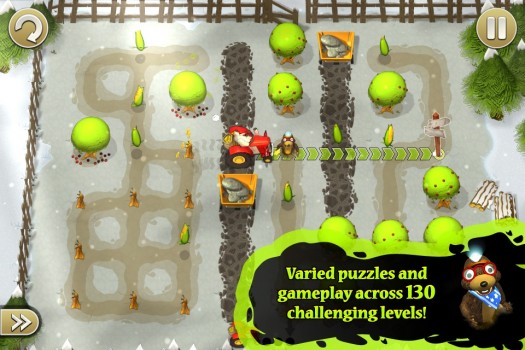 While controlling Red may be easy, the challenge does ramp up quickly meaning you’ll need to learn fast to stay ahead. The initial levels are pretty much on auto-pilot with little or no chance for error, while more advanced levels will all but require plenty of plotting ahead to make sure you’re going to be able to plant as many trees as possible. In fact, a stage not too far into the game left me puzzled for more than fifteen minutes before coming up with a working solution. 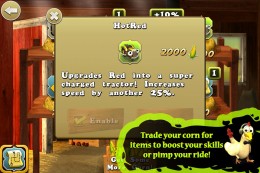 The real challenge in each stage is trying to determine where exactly to send Red without screwing up. Sending him down the wrong path means you have to start over, so planning ahead is best when coming up with solutions. Combine that with the time bonus that’s riding on each stage, and you’re in for a brain buster if you’re not in the correct mindset. The more you play though, the more the mechanics begin to click, and you’ll find yourself having fun without too much trouble. On top of that, the payoff of finishing each stage is satisfying, rewarding you with much-needed stars and achievements for completing stages as efficiently as possible.

Spicing up the gameplay in Tractor Trails are the power-ups you can purchase with the corn you collect (or purchase through IAP). You can buy upgrades such as a queuing system, which is a bit of a saving grace to the gameplay (which can be a bit slow once you get the hang of it). Other power-ups include undo and speed upgrades. These don’t do as much to change the gameplay but can help out if you’re finding some stages a bit too challenging. The problem (albeit minor) with these upgrades lies in the pricing system, as you will have to continually purchase most of these items over and over again with increasing prices after each purchase.

Each set of levels does appear to have its own distinct theme, with its own color scheme to go with it. For instance, the first set of levels has a distinct shade of green, meant to represent a sunny, summer style. In the second set, you’ll be seeing a lot of brown as the theme is meant to represent autumn. After spending a good amount of time in each level set, your eyes will welcome the change of scenery each time it happens. The graphical tone seems to borrow a bit from Triple Town (Free) but there was never a vibe of ripping off, although the similarities are clear.

Where Tractor Trails really nails the fun factor is in its simplistic, yet rewarding gameplay. A game that you can pick-up and play for a few minutes or up to a few hours is still rare, so it’s nice to see that Tractor Trails stays as fun as it should long after you’ve started.