I’m a little out of touch with the Kindle and Facebook game world, so pardon me if you already know this: Triple Town [Free] is amazeballs. Yeah, that’s right. Amazeballs. It’s also freemium, so I’m not actually sure what you’re waiting for. Go download it.

You know how Dungeon Raid [$0.99] took the match-3 thing and made it completely soul-consuming? That’s exactly what TripleTown does. But for those of us not into gaming in our browsers or on our e-book readers, it’s brand spanking new, something Dungeon Raid hasn’t been for a while.

So here’s the scoop. Triple Town is a pretty straightforward matching game with cutesy art and simple tap controls. It’s all about matching things in groups of at least three, a rather familiar task. Instead of clearing the board, you’re building it up. If you play haphazardly, making every match you can, you won’t get far. 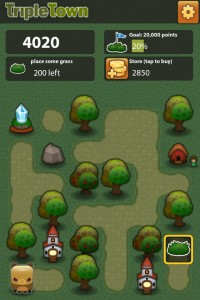 That’s because everything in Triple Town can be upgraded. You’re given a six by six grid partly filled with randomly generated terrain. You draw random tiles to work with – a chunk of grass, let’s say. Plant it, and then plant two more beside it to make a bush. Put three bushes together to grow a tree. Three trees together builds a hut, and three huts makes a house. Each combination gives you a little breathing room, but you can’t outright clear anything off the board until you match up the very top tier.

When you put down the last piece of a triad the upgrade forms out of that piece’s position. It’s incredibly easy to end up putting your trees all over town if you’re not careful, and not so simple to actually build them together. If you want to do well you’re going to have to plan a few steps ahead and be ready to improvise. Occasionally you’ll luck out and draw a crystal, which acts as a wildcard, or a bot which can clear a space. You can also switch out one piece for safekeeping, which can save your city-building career if you use it well. 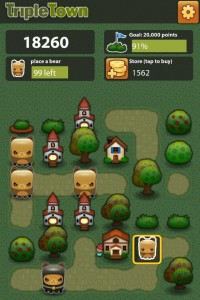 Then there are the bears. You have to murder the bears. Don’t be fooled by their cute little faces – they’re jerks and they’ll fill up your town if you don’t deal with them. You can kill them by trapping them, and they leave a gravestone behind. Three gravestones makes a church. Three churches makes a bigger church. Yeah. Suddenly you’re dealing with two separate upgrade paths all getting in the way of each other.

Since the grid you’re playing on is pretty tiny, mistakes don’t take long to come back and haunt you. The goal is to earn more and more points to upgrade your settlement to a camp, a town, a city, a megalopolis and several steps in between. Each milestone is a Game Center achievement, so let’s just say I don’t have many achievements yet. It’s easy to keep getting better, though. Every failure yields a lesson, and once you’ve got the system down it’s just a matter of putting it into action.

There’s only one problem: eventually the free ride runs out, and when it does, it hurts. Triple Town gives you a limited number of turns to work with – enough for a lot of free play, enough to get you hooked. After that, you can buy 200 more turns with coins. You earn more coins each time you finish a game, but it’s not really a sustainable practice. So you’re probably going to need to shell out. You can either buy coins for cheap and keep going 200 turns at a time, or you can splurge to unlock unlimited turns at a painful rate – $6.99 in the US store. 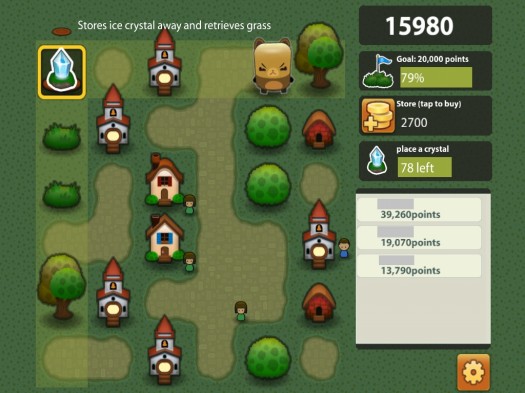 I won’t argue that’s not a lot to pay for a simple little game like Triple Town, given the App Store economy. But the game offers such a generous amount of free play that it’s worth getting even if you’re not interested in putting any cash on the table. Of course, you’ll need to rely on your willpower at that point, which might be a heavy burden to bear.

Sure, Triple Town is just another matching game, but it’s deep and surprisingly strategic. You’ve got to plan your moves out in advance while dealing with random draws and turns ticking down. You’ve got to balance spending your coins on the exact tile you need with earning enough each game to keep you going. It’s challenging enough to keep your brain working and simple enough to dig in those one-more-game hooks. So why not give it a look? The first hit is always free.