Ah. Werewolves. One of the three components in the holy Hollywood trinity of monsters. They ordinarily come in two flavors: loud, ravenous and incapable of anything but wanton violence… or dark-eyed eye candy. The transmogrification-happy lupine of MacGuffin’s Curse ($4.99), however, is neither of those.

Indie development studio Brawsome has MacGuffin’s Curse billed as a ‘comedy puzzle-adventure’, an appropriate description if there ever was one. Operating from a top-down perspective, MacGuffin’s Curse is rife with all the switch-flipping, block-moving, barrier-removing goodness that is standard of the genre and the silliness of a Terry Pratchett novel. Here, you play as the charming Lucas MacGuffin, a red-haired thief who dwells in a considerable destitution with his young child and elderly mother. He has something to say about pretty much anything and everyone, a peculiarity that may either have you rolling your eyes within the first ten minutes or chuckling away in appreciation. Take your pick. Either is applicable. 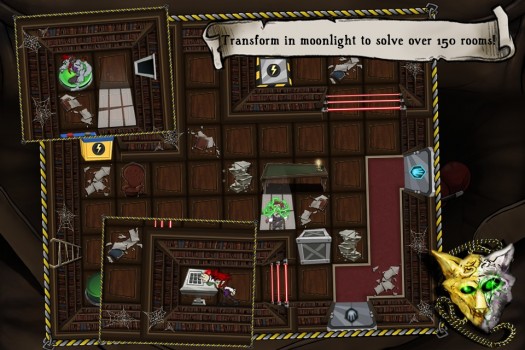 The game opens with Lucas on his latest heist. In order to pay the rent, you’re going to have to retrieve a certain amulet from the extremely lightly-guarded depths of the local museum. As you might have guessed already, one thing leads to another and you eventually find yourself bound to the cursed jewelry and gifted with the ability to transform into a powerful, red-maned werewolf whenever you choose to. No, I don’t know how this really is a curse either.

This, of course, is one of the game’s primary gimmicks. Each of your two forms has a different set of abilities and limitations. As a human, you’re capable of doing delicate things like operating doors and squeezing through windows. As a werewolf, you’ll be able to manhandle safes, blocks, enormous battery packs and dig for buried treasure. Most, if not all, of the puzzles will require you to make use of your dual set of talents. 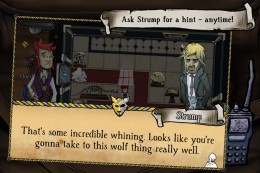 Speaking of the puzzles, let me reassure those who have played through the lite version of one thing: they do get harder. While the game’s collection of mind-benders don’t really deviate from the standard ‘push this block here, activate that switch there’ formula, there is enough variety in the mix to keep you playing (even if you have to do it in chunks). I’m especially fond of one of the earlier ‘boss’ battles. Instead of doing the standard werewolf act where you charge headlong into your enemies and rip their hearts out, MacGuffin’s Curse will have you maneuvering from room to room as you attempt to close the distance by circumnavigating your enemy’s attempt to stall you.

Though best played by those who enjoy the idea of a combat-free Zelda, MacGuffin’s Curse is still something I would recommend to those who don’t. Well, if you enjoy the whole comedic narrative thing, at any rate. It’s true that MacGuffin’s Curse tries just a little too hard (it doesn’t so much nudge you in the ribs as it does grind them into a paste with its hypothetical elbow) but it does have heart. You see it in the details – in the way the comments change depending on the kind of skin you’re wearing, in the over-the-top characters, in how the game lets you slowly build up a half-decent apartment for Lucas’s family and the details of the setting. There’s a fair amount of side quests for you to indulge in as well, something that helps flesh out the Neil Gaiman’s Neverwhere-esque undertones of the world that Brawsome constructed.

The only thing that I didn’t really like about McGuffin’s Curse is, perhaps, the controls. In order to move, you touch a finger on the screen and drag it in the direction you want Lucas to go. In order to push or pull blocks, you’ll have to use two fingers instead. Now, there’s nothing wrong with this and, for the most part, it works out decently well. Nonetheless, because of positioning, you sometimes find your fingertips blocking out vision, a phenomenon that makes me pine a little for a virtual d-pad.

Is MacGuffin’s Curse worth purchasing? Yes. Definitely. It may not extract the ‘Oh, god! This is ingenious!’ sort of reaction with its puzzles, but the relentless humor, intriguing setting, adequately-designed puzzles and faint Tim Burton vibe will make it a delicious addition to anyone’s collection of crate-puzzles.