I’ll be honest, I’m wary of any games I download onto my phone these days that promise any sort of physics-based fun. I’m burned out on that scene, plain and simple. However, I do like cats, as you may know from my past reviews, and I like the idea of forcibly launching a cat out of a cannon (in safety gear, of course, folks). So I caved for Cannon Cat ($0.99), and I admit, now I’m really glad I did.

Cannon Cat has a flimsy premise, as most iPhone games do — something about skyfish being imprisoned in bubbles by a guy named the Evil Emu. I think that it’s cute fluff, but I didn’t pay it much mind before I jumped headlong into the game. We’re not here for deep stories, after all – I came here to put a cat in a cannon and rocket him across the skyline. I mean, who doesn’t want to do that? 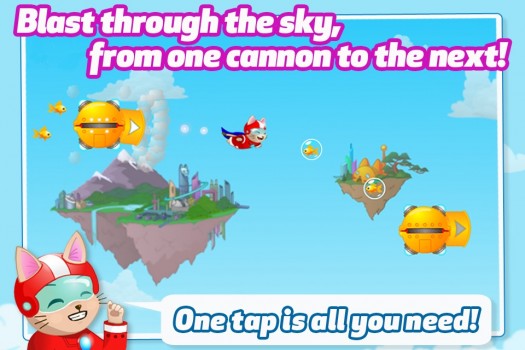 Good news: that, my friends, is exactly what you are going to do, over and over. Cannon Cat is diced up into into two worlds, Kapalua Islands and Cedaria Reef. Apparently a third world called Stratos is coming soon as well. Each of these worlds holds roughly 40 levels to work your way through, which sounds like a lot, but if you factor in that each level takes you less than a minute to play, you could finish Cannon Cat in just a couple of hours. And I found that mildly frustrating, because I wanted to play more. 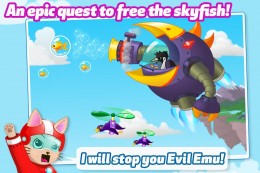 Each level contains a series of cannons, and your job is to guide Cannon Cat from one to the next, collecting the skyfish along the way. As you can imagine, this starts simple and becomes challenging with the addition of obstacles. Each cannon moves when you are inside of it, so you can choose the directions to send your cat flying in. Choosing alternate paths may mean collecting all the level’s fish, so you don’t always want to go in a straight line, as you could be missing out. You go through a ring at the end of each level to complete it.

When you finish each level you’ll be ranked on whether you got all the fish, and if you didn’t, you lose out on bonuses that would have improved your score. You also have a handful of cool powers at your disposal, such as a shield, an option to use “cannon time" (which causes slow motion), a boost that makes the skyfish bigger so they are easier to pick up along the way, and an autosave that automatically zips you back to the last cannon you were in before you failed.

These are all optional power-ups, and you can use an in-game currency called sparks to buy them. At first you’ll have some free ones, but if you use them all, you’ll need to spend some real life money to get more. It’s not at all necessary to enjoy the game, though.

I think the best way to appeal to a gamer who grew up in a time period when games were at their most challenging is to use some of the same structure in current games. It hooks us, and I admit that little touches like that really work on me. Cannon Cat is not radically unique, in fact it’s very similar to another iOS title Land-a Panda ($0.99), but there’s something about the structure of it that also reminds me a bit of golden era platformers like Mega Man and Sonic the Hedgehog.

That’s probably because like those games, Cannon Cat is precise and easy to play, it’s fast, and it’s a lot of fun. Also, it’s free, and it looks like the developers plan to expand on it, so it’s well worth your time to grab this game and spend some leisure time sending your feline friend in search of flying fish.