Ladies and Gentlemen, start your engines. As Nimblebit’s Pocket Planes continues to barrel through its beta period, we’ve had a chance to try out one of its new features. It’s been added since our GDC preview and we’re pretty sure you’re going to like it.

You know how Tiny Tower [Free] and Pocket Frogs [Free] have missions you can complete—stock this much of certain items, or breed certain colors and patterns of frogs? Pocket Planes is going to have missions, too, but they’re competitive. For these ones, you’re going to need a little help from your friends. Or rather, your flight crew. 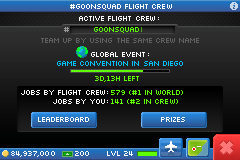 A new Flight Crew challenge will be posted every so often—maybe twice a week. The challenges look to be pretty simple: deliver as many jobs (pieces of cargo and passengers) to a certain city somewhere in the world. You can’t just take any old thing, though. Everything in the game has a destination, and the destination needs to match the city for this to work.

Your Flight Crew can have as many or as few people as you can muster, but the more the better: the crews who manage to bring in the most jobs will win some very cool in-game prizes. Like, say, the bad boy below. Look familiar? Nimblebit is hard at work making up some very cool secret planes as we speak—here’s hoping for a good ol’ fashioned airship. And on top of the cosmetics, it sounds like there will be a Bux reward to boot. 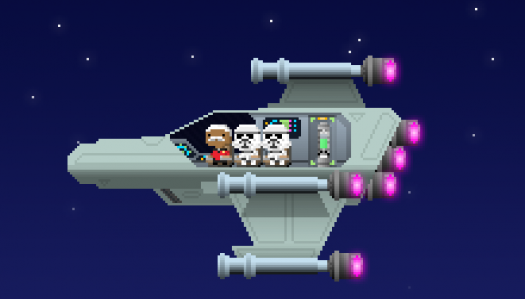 Now Pocket Planes is still a work in progress, so none of this is set in stone. But currently, the only thing you need to join a Flight Crew is a Game Center account (which you don’t need to share with your crewmates) and a common Flight Crew name. If I were the sort of person who wanted to get a leg up on the competition, I might use that information to hit the forums and start drumming up a good team of people. While I was at it, I might try to recruit a few of the folks who have put 2323 pages of forum posts into trading frogs in Pocket Frogs. Those dudes seem like they might have the dedication for the job.

The rest of the game is coming along nicely, from what we’ve seen, and it looks like Zynga hasn’t caught on to it so far (fingers crossed!). Nimblebit isn’t ready to commit to a release window yet, but it can’t be too far over the horizon at this point. So stick around—we’ll have much more to show you as Pocket Planes gets ready to touch down.