I’m sure there are a lot of folks out there that took a quick glance at Millipede Creative’s Bullistic Unleashed [$0.99] and just kept moving. After all, the screenshots are filled with crude humor, the trailer a repository for irreverence, and there’s more lewd imagery and graphic violence than you can shake a stick at. However, if you look past all the window dressing, you’ll quickly discover that Bullistic Unleashed is an excellent game that combines several different genres successfully.

Bullistic puts you in the role of a bunch of cocky bulls that decide to demolish a shopping mall as well as all its inhabitants. You’ll accomplish this through 20 different levels, each with their own obstacles and layouts (including the now literal bull in a china shop). Cause enough damage in a level, and you’ll unlock the next. You’ll also unlock seven different bulls available for use by collecting hidden coins in each level. Each bull has their own special moves and physics attributes.

While it’s easy to describe Bullistic Unleashed as a simple physics-based title, it’s a bit more complicated than that.  Yes, you slingshot animals (bulls, in this case) across levels in an effort to cause as much havoc as possible. But, while similar games pit you against specific enemies, Bullistic wants you to simply cause as much damage as possible. Also, the game is littered with accelerators, elevators and barrels which have the potential to greatly extend the life of your bull after the initial shot. Also featured are bumpers and various obstacles that can put your bull out of play. 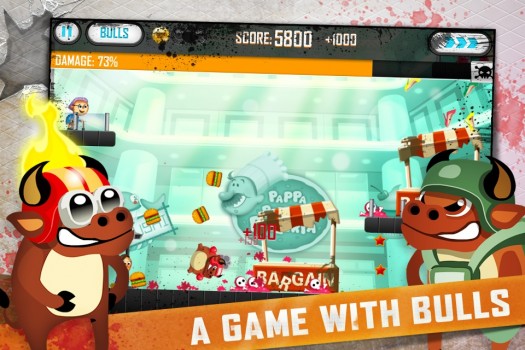 With all these elements, Bullistic plays like a hybrid of Angry Birds, Peggle, and pinball. That may sound like a strange combination, but it works surprisingly well. While the initial physics and slingshot are obviously important (and can make or break a level), the additional level elements are always in play and add an element of chance that keeps you coming back even when a level seems impossible. There’s a certain amount of timing and precision that provides additional rewards to the patient gamer. Levels are also compact, making this an easy title to play on the go.

All of this leads to a game that is widely accessible while providing incentive to gamers that want to put forth more effort. Furthermore, it’s also simply a blast to play. The wanton destruction never gets old, and there’s a ton of different ways to complete levels (especially when you start unlocking the different bulls). Later levels also have a surprising amount of strategy, and finally hitting 100% destruction on a level is an extremely satisfying experience. 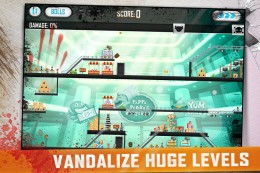 In addition to the well-executed gameplay, Bullistic also gets a lot of the supplemental elements done right. The retina visuals are clear and detailed (for better or worse), with very little slow down. There’s enough content to keep most gamers satisfied (although I would like to see more levels in a future update). Even the presentation is top notch, with amusing menus and IAP shops. One minor complaint is the game’s excessive pushing of social network features and IAP, although neither is required to succeed at the game.

Let’s talk about humor, because Bullistic Unleashed is one of the most hilarious games I’ve ever played. Relatedly, it’s also one of the dirtiest games I’ve encountered in the App Store. You slingshot the bulls across levels using, well, their balls. Also, there’s a lot of gratuitous violence and screen-filling blood splatters as your bulls massacre the mall inhabitants (launching your poor bull into a meat grinder is certainly a sight as well). Let’s not forget the cows either, as your bulls will immediately stop the destruction if they get anywhere near their bovine companions (I’ll leave you to figure out why).

However, it’s not all juvenile jokes. Bullistic has a lot of enjoyable wit, especially with the various descriptions of the different bulls, as well as the general story. There’s enough pun-play involved that you know that the developers attempted to strike a balance between wit and crude humor – but then decided to go all out on the latter at some point.

There’s no doubt that Bullistic Unleashed isn’t for everyone. The over-the-top violence and humor will simply not work for some people. However, I implore anyone on the fence to bite the bullet and check out this title. It strikes that hard sought balance of accessibility, appealability (again, for some more than others) and enjoyability with very little in terms of detraction, and it’s certainly one of the better physics-based titles that I’ve checked out.