Tentacle Wars HD ($1.99), the new title from FDG Entertainment, is a port of the online Flash game of the same name by Lumarama. It’s a fast-paced iPad strategy game that reminds me a lot of Galcon ($1.99), another iOS strategy game from 2008. In fact, I’d go as far as to say it’s “Galcon with tentacles" …along with superior graphics, ambient music and better sound effects.

Playing Tentacle Wars is like being a general overlooking a battlefield. Although in this case the battlefield exists inside the body of an alien life-form. The battles are between antibodies, spores, pulsars and embryos. Each cell can use DNA energy tentacles to attack each other. If your green antibody cells can turn all the other cells green, you’ve cured the zone. Once you clear all the zones, you’ve saved the alien life-form.

To launch an attack, you swipe a line from your green cell to any other cell in range. The more powerful your cell (as indicated by a number inside it), the further it’s tentacles can extend. You can target a red cell (enemy) to engage in battle, target a neutral grey cell to claim it, or target one of your own cells to transfer energy to where it’s needed. 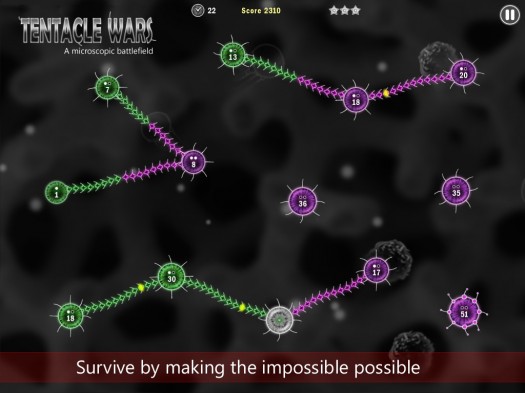 The battles are based on a simple premise: The more powerful cell(s) always win, every time. So if your cell has a weaker strength it will slowly be drained until it’s defeated. But, if you attack the same opponent with tentacles from another cell simultaneously, you can defeat it, because your two cells are collectively more powerful. So, as in real war, choosing your targets carefully (but quickly) is important. 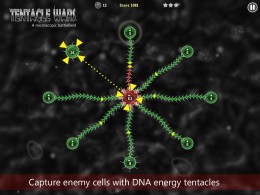 Once your tentacle has latched on to another cell, you can either remain connected to slowly drain it or swipe across your tentacle to cut it. Interestingly, it makes a difference where you sever your tentacle. So, if you slice it right in the middle, half the resources return to the attacking cell and the other half do a rapid attack-burst (ie: a 50-50 split). Whereas, if you cut your tentacle right at one end, all the resources in the tentacle will quickly retreat or attack, depending which end you slice.

To add variation, there’s impenetrable barriers within some levels, purple cells with superior intelligence to overcome, and limits for how powerful a single cell can become within each level. Each cell type also has a limit to the number of tentacles it can extend at one. These factors, plus some interesting level designs, encourage you to modify your strategies to suit each level.

The single player campaign (2 worlds, 40 levels total) is entertaining and satisfying, but far too short. By the time you’re settling in, the single player campaign is over. Additional levels are promised – but randomly-generated levels would be better. Lastly, the campaigns are rather anti-climatic once you complete each world, as nothing really happens, except a small note in the corner of the iPad screen confirming a Game Center achievement.

Multiplayer mode offers two-player online action via a random match-up or by challenging a friend, via Game Center. Choose an arena and color, then engage in a microscopic war ….and in my case, get totally owned by superior players. The online play worked flawlessly once started, but it was often unable or slow to complete a random match-up. That isn’t ideal since the single player mode is completed so quickly, but isn’t a problem if you’re playing friends online.

Tentacle Wars blends strategic gameplay with arcade-style swipes and cuts to create a fast-paced strategy game that’s ideally suited for touch screens. The game is similar to Galcon, but has enough innovation to feel fresh and new. Yet, it needs more levels and online players, otherwise the fun feels as if it’s over too quickly. According to our discussion thread, an iPhone/iPod touch version is expected around May or June.